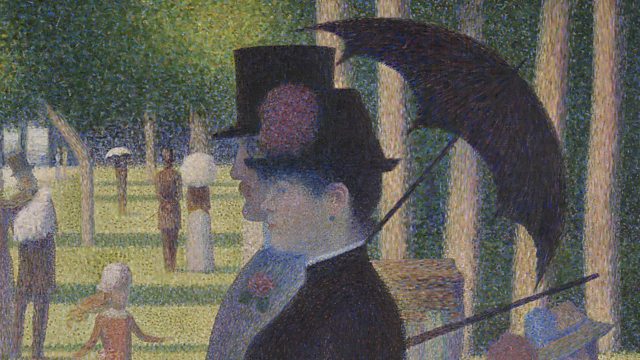 A Sunday on La Grande Jatte by Georges Seurat

Take the closest of looks at Seurat's pointillist masterpiece, A Sunday on La Grande Jatte. With Cathy FitzGerald.

Each thirty-minute episode of Moving Pictures is devoted to a single artwork - and you're invited to look as well as listen, by following a link to a high-resolution image made by Google Arts & Culture. Zoom in and you can see the pores of the canvas, the sweep of individual brushstrokes, the shimmer of pointillist dots.

The new series starts with a closer look at a pointillist masterpiece - George Seurat's A Sunday on La Grande Jatte (The Art Institute of Chicago). Painted in the 1880s, it depicts a group of day-tripping Parisians enjoying the sunshine by the river Seine. Each is a character in search of a story - the boater smoking his pipe, the shop-girl with her novels, the elderly invalid, shivering despite the sun, and the soldiers, standing to attention.

Cathy takes a wander in the park and hears how Seurat created his shimmering, glimmering, light-filled work.

Georges-Pierre Seurat. A Sunday on La Grande Jatte (1884–86). The Art Institute of Chicago.

The Adoration of the Kings by Jan Gossaert

See all episodes from Moving Pictures

Explore the high-resolution image made by Google Arts & Culture 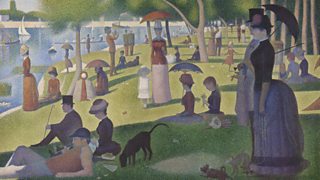 From the Collection of the Art Institute of Chicago.

Kimono – Explore the high-resolution image made by Google Arts & Culture 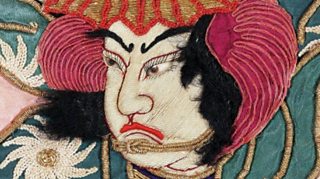 From the collection of The Victoria and Albert Museum. 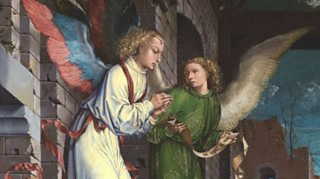 From the collection of the National Gallery, London.

From the Collection of the Art Institute of Chicago. 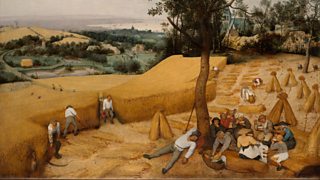 Zooming deep into paintings by Bruegel and Rachel Ruysch, and a Japanese screen.