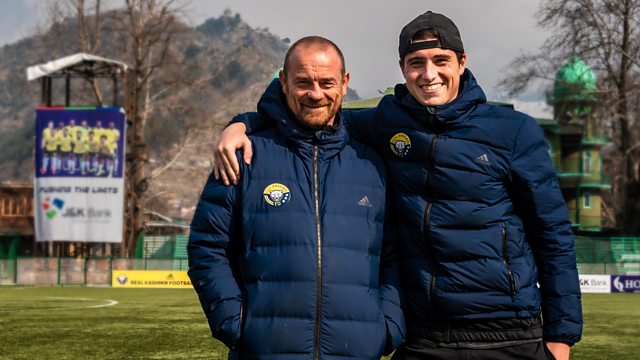 Former Aberdeen and Rangers star Davie Robertson has left everything behind and moved to India to manage Real Kashmir FC. It's football in the danger zone, can he make it work?

Former Aberdeen, Rangers and Leeds United stalwart Davie Robertson is a long way from home. In fact, he is a long way from anywhere. He is the new manager of Real Kashmir FC, and he has left behind his wife and the millionaire lifestyle he earned from football, to live in a shared house in a city that regularly suffers violent protests and terrorist attacks.

Why? What is it about football that drives him so far to be the manager of Real Kashmir FC? For Davie it’s because few things in life can match the highs and lows of football. Real Kashmir are up-and-comers, newly promoted to a league where most of the other teams have much deeper pockets, more fans and a longer history. To beat them Davie must put into action his 'masterplan'. But against the background of chaos in Jammu and Kashmir will it ever work? In a place where violent protests erupt most weekends, the electricity is routinely switched off - meaning no internet, phones, or television - even the basics can be a struggle, so organising and motivating a diverse team drawn from India, Africa and Europe to play top-flight football is no easy task. 'Some of the boys pray at different times, some are vegetarian so telling them about a proper diet and running a schedule where everyone is there is always difficult. All the different religions pray at different times!'

However, this is not just a footballing story it's also a story of hopes, dreams, and family. Davie's obsession with football has driven him to the ends of the earth, and in amongst the struggle for success on the field he has to learn to live in very unfamiliar world, far from his wife Kym. Davie's used to the comforts his success in football brought him. With Kym and his two children he enjoyed living in the States - where he moved after his playing career came to an early end - but his son, Mason, is now a regular in the Real Kashmir team, living in Srinagar near his father. Together they have a chance to explore a part of the world that is both stunningly beautiful and so riven with violence that the UK's Foreign Office advises against all but essential travel to the team's home base in Srinagar.

Kym worries about Davie and Mason living and working in a conflict zone. When Davie announced that the move to Kashmir was a possibilty Kym - a self-confessed football widow - says only half joking that 'divorce was considered'. 'David came in with the Real Kashmir deal and tried to sell it to me. I'm like 'no, not doing it'. So we didn't speak and then on New Year's Eve 2016 David got on a plane to India!'.

As the new season - the first since Davie helped Real Kashmir secure promotion to the Indian 'I' League - starts Davie needs to make sure his team believes they can win. It is here that manager can lift ordinary players into world-beaters. As each big game approaches everything needs to be right. He has lifted his team before and gotten them promoted but can they succeed in the new league? Is Davie's masterplan for success is going to work? Has what it takes to be a manager.