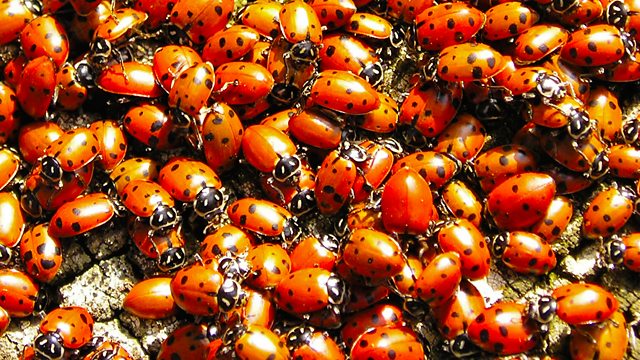 Melvyn Bragg and guests discuss how animals influence the behaviour of others of their species by secreting or excreting chemical substances.

Melvyn Bragg and guests discuss how members of the same species send each other invisible chemical signals to influence the way they behave. Pheromones are used by species across the animal kingdom in a variety of ways, such as laying trails to be followed, to raise the alarm, to scatter from predators, to signal dominance and to enhance attractiveness and, in honey bees, even direct development into queen or worker.

The image above is of male and female ladybirds that have clustered together in response to pheromones.

Tristram Wyatt at the University of Oxford

Jane Hurst at the University of Liverpool

Francis Ratnieks at the University of Sussex

Laboratory of Apiculture and Social Insects – University of Sussex

‘Sexing up the human pheromone story: How a corporation started a scientific myth’ – The Guardian, March 4th 2015

‘Evidence for a queen-produced egg-marking pheromone and its use in worker policing in the honey bee’ - Journal of Apicultural Research, 1995

‘Thoughts on information and integration in honey bee colonies’ – Apidologie, 1998

‘The search for human pheromones: The lost decades and the necessity of returning to first principles’ - Proceedings of the Royal Society of London, 2015

‘Scent wars: the chemobiology of competitive signalling in mice’ - BioEssays, 2004

‘Communicating through scents: An interview with Jane Hurst’ - BMC Biology, 2018