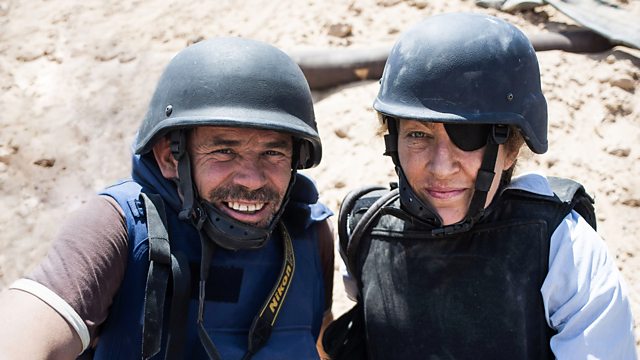 Paul Conroy and Marie Colvin's fateful mission to tell the story of the civilians trapped by the Syrian conflict in the besieged city of Homs.

On 13 February 2012, war-correspondent Marie Colvin and photographer Paul Conroy entered war-ravaged Syria to cover the plight of civilians trapped in the besieged city of Homs, under attack by the Syrian army. Only one of them returned.

Marie Colvin was one the most fearless reporters of her time. She dedicated her life to bearing witness to the lives of ordinary people caught up in the world’s most dangerous conflicts. She covered Afghanistan, Iraq, Israel and Palestine, Sri Lanka, Chechnya and East Timor, and was on first-name terms with leaders like Muammar Gaddafi and Yasser Arafat.

In 2001 she lost the sight in her left eye after being caught in crossfire by a piece of shrapnel. On 13 February 2012, Marie was smuggled into Syria with her photographer, Paul Conroy. Despite intelligence reports that foreign journalists found in the area ‘would be executed and their bodies put on the battlefield, as if caught in crossfire’, they headed to Homs, determined to uncover the horror of Syrian civilians trapped by the conflict. Only one of them would return.

Based on the book of the same name by Paul Conroy, Under The Wire is the incredible story of Paul and Marie’s fateful mission, and Paul’s epic battle to escape the city to tell the world of his fallen colleague and the plight of the people of Homs. Under the Wire is a film about real journalism, about war and about an extraordinary commitment to telling the truth, whatever the cost.