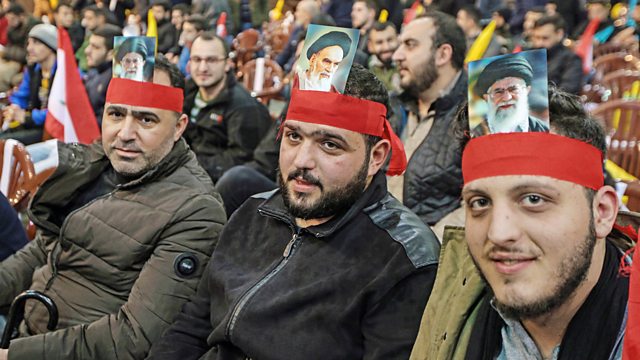 How supporters of the political and militant group Hezbollah commemorate the events of 1979. Kate Adie introduces this and other stories from correspondents around the world.

In much of the world Hezbollah is considered a terrorist organisation, but in Lebanon it is one of the country’s most powerful political and military forces. Lizzie Porter was in Beirut as the Iranian backed group began a three-day festival to mark the 40th anniversary of the Islamic revolution in Iran.

Kate Adie introduces this and other stories from correspondents around the world:

Mark Lobel tries to make sense of Dubai where migrant workers are welcomed with open arms – until they become a burden that is or fail to follow the rules.

Katy Fallon is on the Greek island of Lesvos where she visits a community centre offering rare respite to the thousands of migrants crammed into a dangerous and dilapidated camp.

Matt Pickles asks what the rest of the world can learn from Finland’s education system as he tours a school that comes with a class lizard and a couple of dogs.

And has Mike Wendling found the best-barbequed meat in the entire universe? He queues up for hours outside a restaurant in Texas to find out.

Peace is more difficult than war

The Power of God