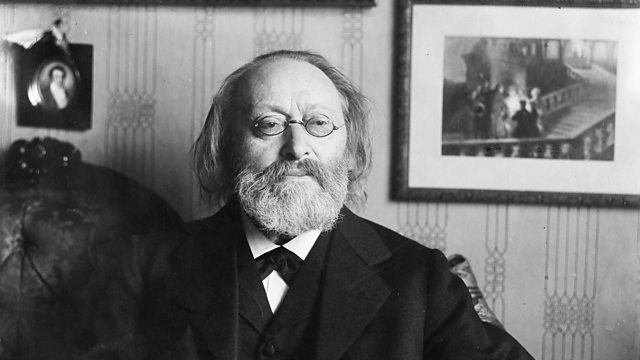 Melody, said Bruch, represents the “soul of music” and nowhere is that better represented than in his first violin concerto. It’s a work which brought him fame and fortune, but it’s also a work he came to hate, since he felt its popularity suppressed performances of his other compositions. It’s a sentiment that has some justification, since Bruch wrote some two hundred odd works, the majority of which rarely get performed.

Aside from a natural outspokenness and a tendency to take umbrage, which lead to some very prickly professional relationships, he also had to contend with some unlucky timing. Born in Cologne in 1838, Bruch was five years younger than Brahms. Even though he outlived him by some twenty years Bruch remained over-shadowed by one of the great luminaries of German music.

This week though the spotlight falls firmly on Bruch, as Donald Macleod explores his concerted works for the violin, an instrument with which he had a very close relationship. Starting with that most famous example Bruch came to resent so much, you can also hear the second violin concerto, which was championed in more recent times by Itzhak Perlman, the third violin concerto, the folk-inspired Scottish Melody and one of his final utterances for the instrument, the Konzertstück, Opus 84.

Attending a performance in Paris given by the Spanish virtuoso Pablo de Sarasate left Bruch deeply impressed. A great showman, with a mop of wild hair, his playing captivated the audience. and Bruch, who enthusiastically determined to write the violinist a major new work.