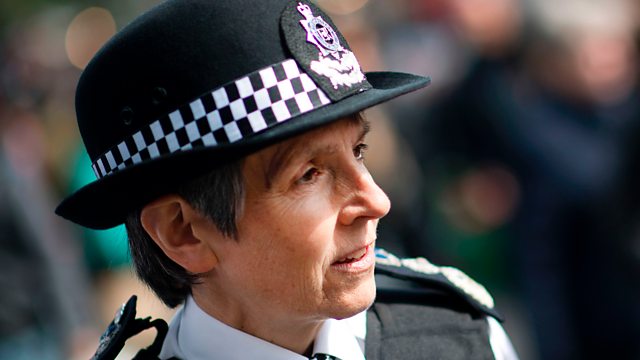 Cressida Dick, commissioner of the Metropolitan Police, tells Lauren Laverne about the eight tracks, book and luxury she would take with her to a desert island.

Cressida Dick is Commissioner of the Metropolitan Police.

She was born in 1960, the youngest child of two university professors. Her parents divorced when she was still at primary school and she and her older siblings grew up in Oxford. Their father died when Cressida was just 11. She read Agriculture and Forest Sciences at Oxford University before spending a year in accountancy.

She joined the Metropolitan Police in 1983 where her first beat was on the streets of Soho. After a decade in London, she transferred to Thames Valley Police where she worked her way up to become area commander in Oxford.

In 2001 she completed a master’s degree in Criminology, re-joining the Met to head its diversity directorate and, from 2003, Operation Trident, the Met’s gun crime unit. It was in this capacity that she came to wider public attention when, in the wake of the 2005 London transport bombings, an innocent man was shot dead by police at Stockwell tube station. The Met was severely criticised in the aftermath of Jean Charles de Menezes’s death. Cressida Dick was the commander in charge of the operation, but a 2007 trial found that she bore no personal culpability.

In 2011, she became Assistant Commissioner for Specialist Operations responsible for counter-terrorism work, but in 2015 she left the Met to work at the Foreign Office. In February 2017, she made her return to policing when she was the successful candidate in the search for a new Commissioner. She took up the post in April 2017 for a five-year term, the first woman and the first openly gay person to hold the job.