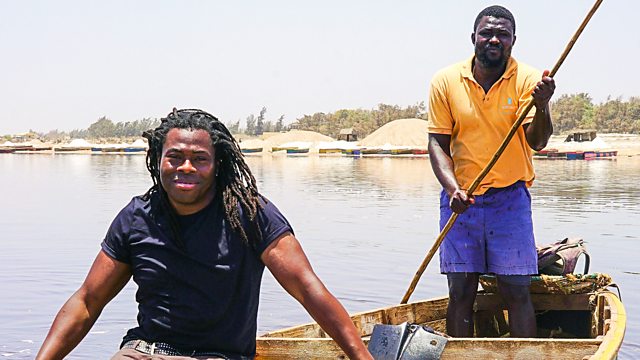 Documentary series. Ade Adepitan embarks on the first leg of his journey around Africa. He travels from Cape Verde to Senegal and the Ivory Coast, before finishing in Nigeria.

Ade Adepitan embarks on the first leg of his epic four-part journey around Africa. Starting in west Africa, this episode sees Ade travelling from Cape Verde to Senegal and the Ivory Coast, before finishing in Nigeria - the country of his birth.

In Cape Verde - a group of tiny volcanic islands in the Atlantic - Ade visits a community living in the shadow of an active volcano. He also witnesses how solar power is transforming lives by bringing electricity to isolated communities.

Ade's next stop is Senegal. Here he visits Goree Island - a former staging post in the transatlantic slave trade. He then travels down the coast to a fishing village, where he hears that much of Senegal’s catch is being taken by foreign companies and turned into fishmeal to feed western livestock. Making a last stop on his journey through Senegal, Ade visits Lake Retba where he joins the workers who wade through the lake gathering salt, which they sell for less than half a penny a kilogram. Ade’s host has tried to escape poverty by migrating to Europe, but - like so many others - he never got further than the horrors of the camps in Libya.

In the Ivory Coast, Ade meets more people who share the dream of getting to Europe. This time, however, they are footballers training to become professionals in Europe’s big leagues. But it does not always work out, as many are scammed into giving their cash to dodgy football agents.

The final stop is Nigeria. In Lagos he meets some old friends who play para soccer, and he also visits the largest church building on the planet. Travelling out of Lagos, he discovers a country in chaos. Under armed escort, he hears about a conflict that has created hundreds of thousands refugees, but barely been reported in the West. He finishes his journey at Nigeria’s equivalent to Silicon Valley – a company that believes tech can transform the continent.

See all episodes from Africa with Ade Adepitan