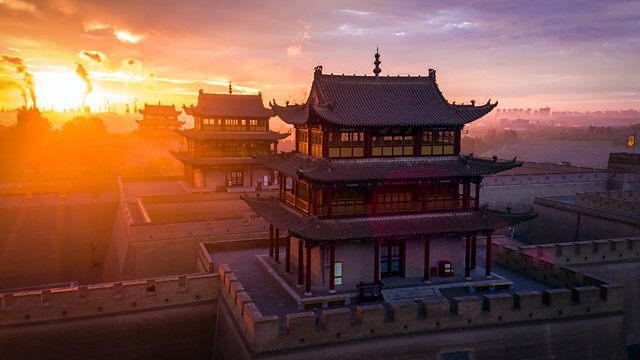 A Slow Odyssey: The Great Wall of China

A spectacular aerial journey following the world’s longest monument, the Great Wall. In slow-TV style, fly 2,500 kilometres along the wall, from the Yellow Sea to the Gobi Desert.

A spectacular aerial journey flying over the world’s longest man-made monument, the Great Wall of China. In classic slow-TV style - without commentary and using authentic location sound - fly 2,500 kilometres along the 2,300-year-old wall, from the Yellow Sea in the crowded east, near Beijing, to the remote Gobi Desert in the west.

This epic adventure explores 20 location highlights of the Unesco World Heritage Site, built by the Ming Dynasty between 1368 and 1644, starting at Old Dragon’s Head on the east coast and ending at the extraordinary Jaiyuguan Fortress - once the gateway into China from the ancient Silk Road trading route.

With the help of informative captions, witness the classic stone, crenellated walls, ramparts and watchtowers, which rise and fall over the high mountain ranges for the first 500 kilometres of the Great Wall, north of Beijing. Highlights include the famous tourist wall of Badaling, which has seen visits from 500 heads of state, including the Queen and US presidents Nixon and Obama. It was the first section of the Great Wall to open to tourists in 1957.

The middle section explores the rarely seen rammed-earth mud wall, built in provinces with few stone or brick resources, which is much more fragile. More than a third of the entire Great Wall has been destroyed by nature, war and progress over the last three centuries. There is a significant meeting of two Chinese icons as the Great Wall crosses the great Yellow River, known as the cradle of Chinese civilisation.

In the final third of the journey, the wall stretches off across desolate floodplains as it starts to border the remote western Gobi Desert. Flying high above one of the last remaining ancient walled towns, its name becomes obvious - Yongtai or ‘Turtle Town’ – as its 17th-century walls and watchtowers resemble the shape of a turtle.

The final dramatic climax comes at the Qilian Gorge, 80 metres above a roaring river, with the snow-capped mountains of the Tibetan plateau in the distance. The end tower is just a few kilometres from the impressive double-walled Jaiyuguan Fortress, whose three gigantic temple towers dominate the landscape, brandishing the words: ‘The First and Greatest Pass under Heaven’. This was the intimidating welcome to all new arrivals entering China from the west along the Silk Road. A Slow Odyssey is a TV first, showing the Great Wall as it has never been seen before – entirely from the air.