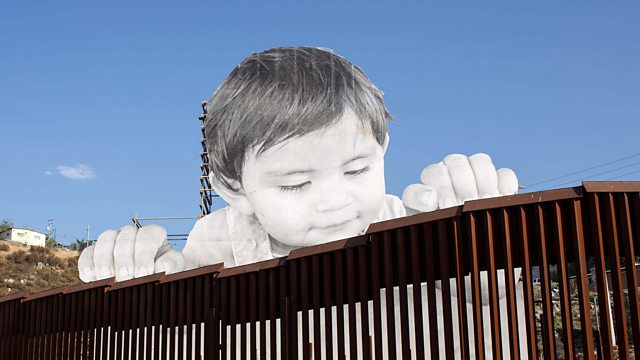 Walls and Borders in Art

A look at the artistic significance of walls and borders.

Front Row considers the artistic significance of walls and borders.

John Lanchester, whose latest novel The Wall is about a massive fictional defensive structure, discusses the way walls feature in literature and art with poet and art critic Sue Hubbard, from cave paintings to artworks like Andy Goldsworthy’s 750 feet long drystone wall.

Artist Luke Jerram takes us on a tour around his home city of Bristol discovering unusual wall art such as the Magic Wall, where children leave toys between the stones, and early works by Banksy.

Mexican artist Tanya Aguiniga, who travelled each day to school in the US, has set up an art project on the US/ Mexico border. She is joined by Suzanne Lyle, Head of Visual Arts for the Arts Council of Northern Ireland, to discuss the influence of borders on art.

Image to the left: The Mild Mild West - a mural by Banksy

Main image above: the view from the American side of the installation by French artist JR on the US-Mexico border fence at Tecate, California

Artist Luke Jerram standing by a mural of Dr Stephen Hawking in Bristol.