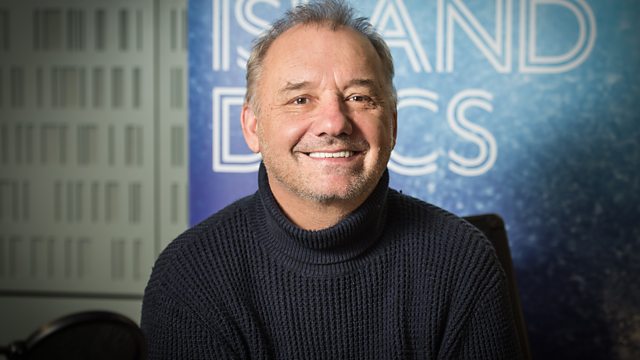 Comedian Bob Mortimer chooses the eight tracks, a book and a luxury he would take to a desert island.

Bob Mortimer is a comedian best known for his work with his comedy partner Vic Reeves.
For 30 years, he and Vic have appeared in numerous TV series together, including Vic Reeves’ Big Night Out, Shooting Stars and The Smell of Reeves and Mortimer. Bob first saw Vic performing in a south London pub: Vic was wearing a Bryan Ferry mask while trying to tap dance with wooden planks strapped to his feet. Bob found this hugely entertaining, and began to take part in Vic’s shows.
Bob was born in 1959 in Middlesbrough, the youngest of four boys. His father died in a car crash when he was seven and Bob says he became his mother’s little helper – although he also set fire to their house after playing with fireworks. As a teenager he dreamed of a career as a footballer, but he ended up studying law at university, and worked as a solicitor in south London.
In 2015 Bob underwent triple heart bypass surgery. After this – in a rare diversion from working with Vic – he accepted an invitation from fellow comedian Paul Whitehouse to get out of the house and go fishing, which led to a successful TV series, Mortimer and Whitehouse: Gone Fishing.

BOOK CHOICE: My Secret History by Paul Theroux
LUXURY ITEM: His own pillow
CASTAWAY'S FAVOURITE: Down to You by Joni Mitchell