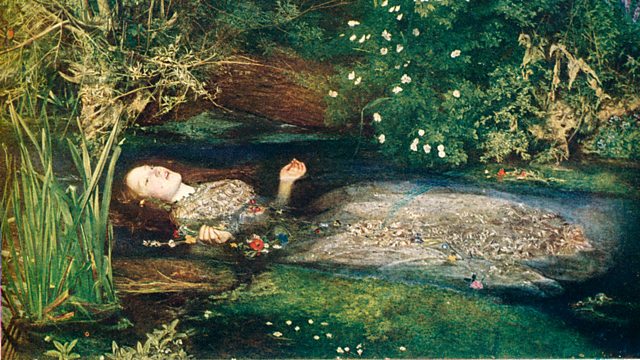 A sonic painting of music, poetry and prose inspired by the 19th-century artistic revolutionaries, the Pre-Raphaelites.

“They meant revolt, and produced revolution”: that's how one critic described the group of late 19th-century artists, poets and writers who came to be known as the Pre-Raphaelites. Actors Jamie Glover and Skye Hallam read words by the Pre-Raphaelites themselves, alongside the sources and subject matter that so fascinated them. Our journey through their artistic universe takes us from Malory’s Arthurian legends and the love poetry of Dante Alighieri in the 13th century, to the sometimes coruscating reviews of Victorian contemporaries like Charles Dickens.

Pre-Raphaelite art is full of woeful maidens with flowing hair, and many suggest that the real women who posed for the likes of Rossetti and Millais were exploited. We'll hear the death of Ophelia described by Shakespeare's Gertrude alongside poetry by Elizabeth Siddal, the celebrated muse who posed for Millais' painting Ophelia, spending days on end fully clothed in a bath full of freezing water.

Musically, we start with Gilbert and Sullivan's Overture to Patience, an operetta that included a character satirising the ever-so-slightly pompous Pre-Raphaelites. There’s also the glistening sound of Debussy's cantata La Damoiselle élue (The Blessed Damozel), based on Rossetti's poem of the same name, and a song from modern-day Pre-Raphaelite Florence Welch.

We finish with words by the only female member of the Pre-Raphaelite clan, Christina Rossetti, musing on how a painter's gaze always renders “One face” looking “out from all his canvases”. That's set against Martha Wainwright's heart breaking song Proserpina, bringing to mind Rossetti’s famous painting of Proserpine – a captive goddess looking out of the Pre-Raphaelite canvas.