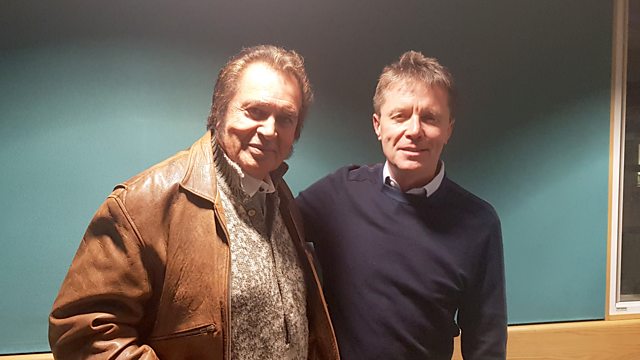 Nicky Campbell celebrates the remarkable career of Engelbert Humperdinck, which has taken him from Leicester to Las Vegas, with many stops along the way.

Nicky Campbell celebrates the remarkable career of Engelbert Humperdinck, which has taken him from Leicester to Las Vegas, with many stops along the way. Throughout this frank but friendly chat, he speaks about his early hits, including “Release Me”, “There Goes My Everything” and of course “Last Waltz”. Meeting his influential but controversial manager Gordon Mills, who also managed his stable mate Tom Jones although they haven’t always been that “matey”. Appearing at Las Vegas where he befriended such luminaries as Elvis Presley, Sammy Davis Junior, Frank Sinatra and the man who always referred to him not by his unusual name but “Humpy, Bumpy, Lumpy, Dumpy”, that was the coolest man in the business Dean Martin and throughout the interview Nicky encourages Engelbert to give his well-known impersonation of his friend Dean. He continues to perform worldwide and it was in Hawaii that he met the megastar Bruno Mars who sang at one of his concerts when he was just 5 years old, to thank him Engelbert recorded Bruno’s hit “Just The Way You Are”. He tells us how he was offered the chance to work with Damon Albarn and The Gorillaz, but missed out because of a management mistake. Also, how he would love to work and record with Ariane Grande, Lady Gaga and of course Bruno Mars. He has had many surprises in his illustrious career and talks about representing the UK in The Eurovision Song Contest back in 2012 and how he was asked to record “Lesbian Seagulls” used on the soundtrack of “Beavis and Butthead Do America” which went Platinum. Despite 60 years in the business he is still in great voice, and maintains “I can hit notes that a Bank can’t cash”. Nicky Campbell, unearths many more surprises from Engelbert’s career but sadly not his renowned impersonation of Dean Martin.