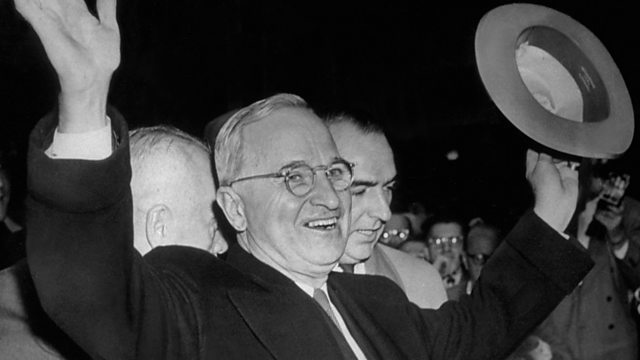 From Straw Poll to Opinion Poll

The history of modern opinion polling from the 1930s onwards.

Today, we can’t imagine an election without an opinion poll gauging public opinion on who’s leading, who’s won a debate or who’s more popular with a specific group of voters. Even our favourite chocolate bars and footballers are subject to a poll. But how did straw polls evolve into the scientific number crunching we know now? What is their purpose and impact? How differently are they used around the world? And just how reliable are they?

Bridget Kendall is joined by economist and chairman of Gallup Pakistan Dr Ijaz Shafi Gilani; Scott Keeter, senior survey advisor for the Pew Research Center in Washington; and Sir John Curtice from the University of Strathclyde.

Picture: American President Harry S Truman smiles and waves to the excited Kansas City crowd after hearing the news that he had won the United States elections in 1948 and retained the Presidency, despite of what many polls had predicted, Credit: Keystone, Getty Images.

Who Was the Real Cleopatra?