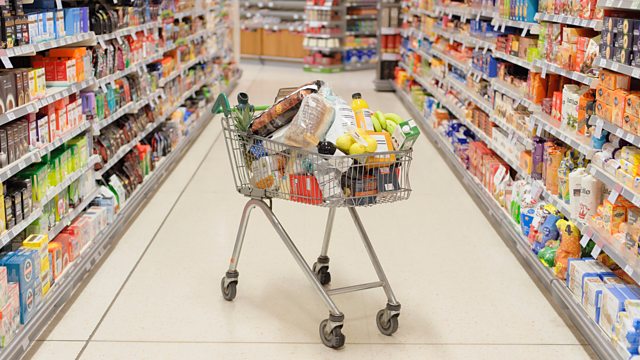 The woman who spent 2018 trying to go completely plastic free.

Shoppers are spending more than they were a year ago on their weekly grocery shop, but less than inflation. That's the finding of new research compiled for this programme by the market researchers Nielsen. They analyse data taken directly from the transactions at supermarket tills and we'll speak to their head of retail about what's behind those statistics.

Reducing single use plastic was one of the big news stories of 2018. From coffee shops, to office blocks and supermarkets, promises were made to reduce or get rid of single use plastics. "Single-use" was even the phrase chosen by the Collins Dictionary as the word of the past year reflecting the increasing awareness of environmental issues. Lots of people tried to go plastic free and we'll catch up with one of our listeners who pledged to give up plastic as part of a New Years resolution in 2018. How did she find it?

And - if you're considering decorating your home, is wallpaper on the list? Sales of wallpaper have been steadily growing for a while. In 2017 shoppers bought 39 million rolls up 2 million from the previous year. There's also a trend towards bespoke wallpaper - if you can afford it. We'll go through the keyhole into the home of an interior designer featuring de Gournay wallpaper which is handmade, but also speak to a manufacturer creating wallpaper for the High Street.

Call You and Yours: Are you fed up with dating online or via apps?