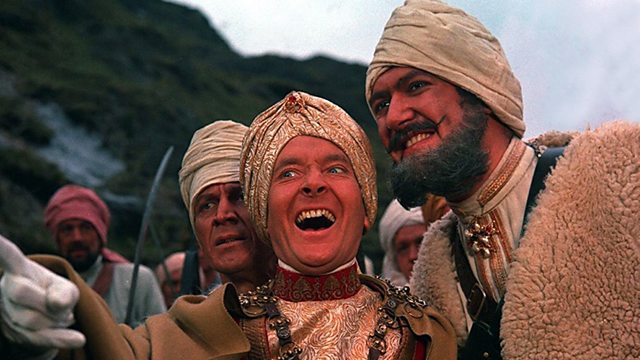 When Carry On Came to Wales

In 1968, the Carry On gang took a trip away from Pinewood to film the outside scenes of Carry On Up the Khyber. Actor Steve Speirs tells the story of When Carry On Came To Wales

In 1968, the Carry On gang took a rare trip away from Pinewood to film the outside scenes of Carry On Up the Khyber. And in this special programme, Welsh actor Steve Speirs, who played Bernard Bresslaw in the TV film Cor Blimey tells the story of When Carry On Came To Wales

The Watkin Path in Snowdonia became the Khyber Pass in India for the purposes of the Carry On antics which involved stars like Kenneth Williams, Charles Hawtrey, Bernard Bresslaw, Roy Castle and Terry Scott descending on North Wales. The movie which pokes fun at British pomposity and excess in the days of Empire also stars Sid James and Joan Sims.

The cast who came to Wales stayed at the Old Goat in Beddgelert and as part of this programme Carry On actors Angela Douglas, who had a leading role in the film and former Bond girl Valerie Leon return to Snowdonia to reminisce about the shoot and to meet those who took part in the events 50 years ago. We hear about locals who appeared as extras, from waiters and others - and Angela is reunited with the man assigned to drive her around at the time. Others Remembering this, one of the most successful in the Carry On cannon include historian Robert Ross and Carry On regular Alexandra Dane who played Busti in ....Up the Kyhber.