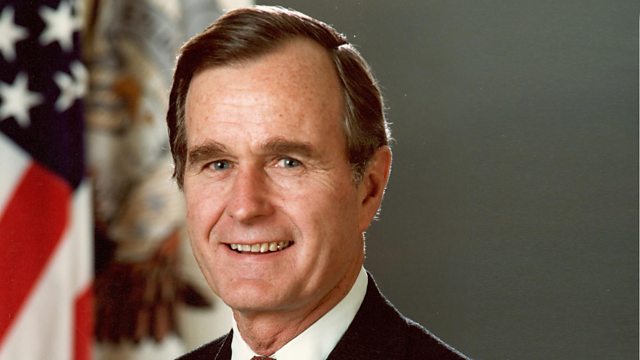 George HW Bush was well qualified to become the 41st President of the United States, but David McNeil shows that his time in office was tumultuous abroad and exacting at home.

A special programme marking the political career of George HW Bush, the 41st president of the United States. It’s presented by the former BBC Washington correspondent, David McNeil, who spent reported from Washington from 1985 to 1993.

The programme shows how, when elected president in 1988, George HW Bush was the consummate political operator. He had previously served as Ronald Reagan’s vice-president for eight years, although his insider credentials stretched way back. Born the son of a US senator, he was first elected to Congress in the 1960s before moving to the heart of government, notably as director of the CIA.

If his ascent to the White House had looked predictable and straightforward, though, his time there was anything but. The collapse of communism in Eastern Europe and implosion of the Soviet Union in 1989 led President Bush to declare the end of the Cold War and the inauguration of "a New World Order". But achieving it proved both tricky - most obviously with German unification - and far from peaceful - as Saddam Hussein’s invasion of Kuwait a year later demonstrated. That pitched the United States into the first significant commitment of US troops abroad since Vietnam. Although successful in repelling Iraqi forces Bush chose to defer a reckoning with Saddam himself.

Meanwhile, at home, a sputtering economy forced George Bush to break a major campaign promise: “read my lips, no new taxes”. This, together with his problems articulating to voters what he described as “the vision thing” for how he saw the country's future, led to Bush’s defeat by Bill Clinton in 1992.

The programme considers why George HW Bush served only one term when American power and economic strength were unrivalled.