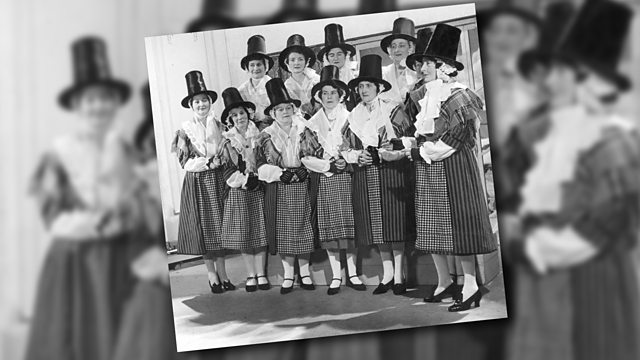 Taking inspiration from her collection of vintage and antique 'Welsh lady' postcards, Mab Jones seeks out their stories and tries to find out what they would say if they could.

Taking inspiration from her collection of vintage and antique 'Welsh lady' postcards, poet Mab Jones seeks out their stories, and tries to find out what they would say if they could, in a poetic tribute to them.

They sit, in traditional dress, in photos from the late 19th and early 20th centuries, looking uncomfortable in tall black hats and scratchy woollen shawls. Occasionally they're arranged around a harp. Usually they're in a domestic setting - silent, obedient, rooted to the spot. Mab wants to find out who these Welsh women of bygone ages were. What were their lives like? How did they think, and feel?

Finding out more about them isn't a straightforward task, because although the subject of wry greeting cards today, the voices of women in Wales of that era have largely been absent from its historiography. Could it be that they didn't really exist at all? The costume was partly invented during the romantic revival in Wales, at a time when the old rural ways were dying out. More decorous than practical, it was celebrated by tourists and visitors, and became an emblem of national identity.

But even if their ways of life have vanished, the female poetic voices of the pre-industrial era are still traceable. In seeking them out, Mab finds poems that speak of the experience and imagination of women through a rich heritage of folk traditions and ancient oral traditions, from anonymous old verses thought to have been written by women, to individual voices that are only now being recovered and translated into English.

Mab composes a poem to the picture postcard version of the Welsh Ladies, who for the camera seem to be inhabiting a life that was not theirs, bringing her warmth and wit to this attempt to bring them, and their forbears, back to life.