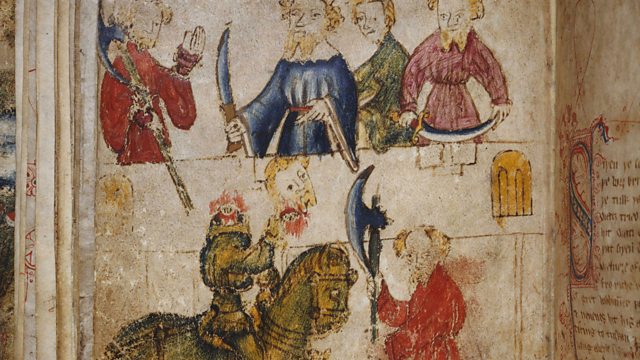 Sir Gawain and the Green Knight

Melvyn Bragg and guests discuss the poem of the knight who interrupts King Arthur's Christmas celebrations, challenging someone to chop off his head if he can do the same in return

In a programme first broadcast in 2018, Melvyn Bragg and guests discuss one of the jewels of medieval English poetry. It was written c1400 by an unknown poet and then was left hidden in private collections until the C19th when it emerged. It tells the story of a giant green knight who disrupts Christmas at Camelot, daring Gawain to cut off his head with an axe if he can do the same to Gawain the following year. Much to the surprise of Arthur's court, who were kicking the green head around, the decapitated body reaches for his head and rides off, leaving Gawain to face his promise and his apparently inevitable death the following Christmas.

The illustration above is ©British Library Board Cotton MS Nero A.x, article 3, ff.94v95

Laura Ashe at the University of Oxford

Ad Putter at the University of Bristol

Simon Armitage at the Universities of Leeds and Oxford

‘Sir Gawain and the Green Knight: an introduction’ by Simon Armitage – British Library

Ad Putter, An Introduction to the Gawain Poet (Longman, 1996)