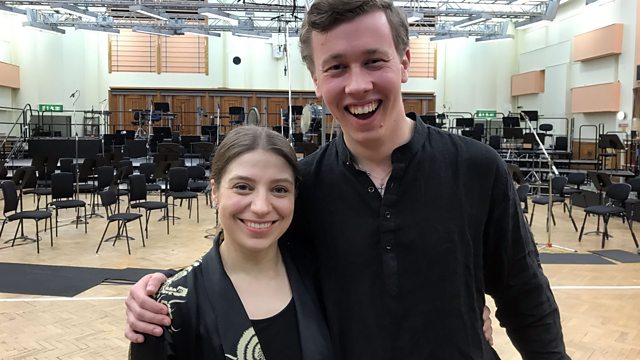 Live from Maida Vale Studios, the young Finnish conductor Dalia Stasevska leads the BBC Symphony Orchestra in music by Linberg, Kabalevsky & Bartok. Presented by Natasha Riordan. After the live concert, Penny Gore continues our celebration of ‘Our Classical Century’, a countdown of the hundred most important events in classical music across the last hundred years. In this final week, we focus on Prokofiev's Peter and the wolf and hear a performance by the BBC Philharmonic conducted by Yan Pascal Tortelier, recorded in 1999, and narrated by David Attenborough. The afternoon concludes with the final pieces from the Total Immersion 'In Remembrance' concert recorded at the Barbican last month featuring Musicians from the Guildhall School of Music & Drama. We'll hear music by George Butterworth who died whilst serving in the Armed Forces during World War 1, and Enrique Granados who became fatally involved in the war only by chance.