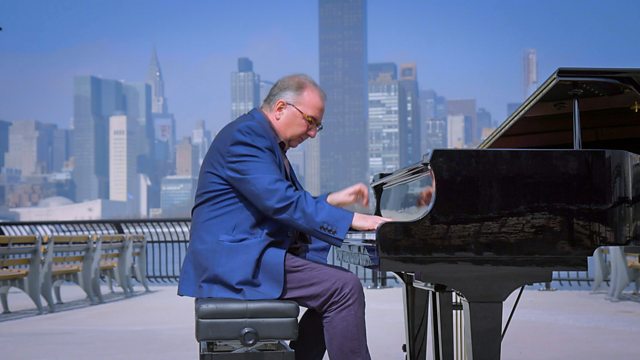 Neil Brand explores a golden age of the film musical, from 1920s Hollywood to the fantasy of Snow White, and uncovers a secret history of musical film in 1930s Soviet Union.

In this first episode of a three-part series, presenter and musician Neil Brand argues that the movie musical was the most important form of cinema from the advent of the age of sound. Beginning with the very first film musical, 1929’s Broadway Melody, Brand looks at the huge and lasting impact of the musical and, in his trademark analysis of songs at the piano, takes us through some of the most important numbers in this first golden age.

The remarkable success of Broadway Melody winning one of the first ever Academy Awards meant that film studios were eager to cash in on the possibilities of musical film. But, as Brand reveals, this was not always to guaranteed success. He shows how the first big-budget, all-colour musical, 1930’s King of Jazz, failed to capture the box office. He discusses how its lack of actual African American jazz musicians was one of its problems, by looking at the first dedicated African American musical - King Vidor’s Hallelujah. With the help of a gospel choir from the Mother AME Zion Church in New York, he examines how much Hallelujah actually reflected life in the Deep South in 1920s America.

Continuing the theme, Brand goes on to explain how the Great Depression in 1930s US actually inspired some of the most progressive and memorable examples of the first golden age of movie musicals: MGM’s 42nd Street and Gold Diggers of 1933. These were remarkably socially aware films, and as Neil demonstrates, songs such as We’re in the Money and Remember My Forgotten Man were both beautifully tuneful and lyrically poignant.

In an unexpected turn, the programme shifts focus to the USSR, where a little-known story of musical film is uncovered. From the early 1930s, Joseph Stalin actually commissioned a series of film musicals to promote the ideology of the Soviet Union. Beginning with the slapstick of 1934’s The Jolly Fellows, two years later came Circus, one of the most extraordinary musical films in Russian history. A tale of an exiled American woman with a mixed-race child, Circus was a remarkable piece of propaganda promoting the Soviet Union as a country of racial inclusion, exactly as Stalin began his 'great purge' - to silence any dissenters from his communist plan.

Back in Hollywood, the musical was surging forward with a whole new level of song and dance movie star; most significantly, the incredible partnership of Fred Astaire and Ginger Rodgers. Brand visits the Royal Ballet in London, where principal dancer Steven McRae dances and analyses one of Astaire’s most jaw-dropping numbers, No Strings. Neil also guides us through the music of Top Hat’s iconic song Cheek to Cheek.

Finally, we explore how the introduction of fantasy and fairy tale invigorated the movie musical in the latter years of the 1930s. Walt Disney’s Snow White was a gamble that took three years to make but became one of the highest grossing films of all time, followed by MGM’s unforgettable The Wizard of Oz, released to cinemas a mere two weeks before the outbreak of the Second World War.