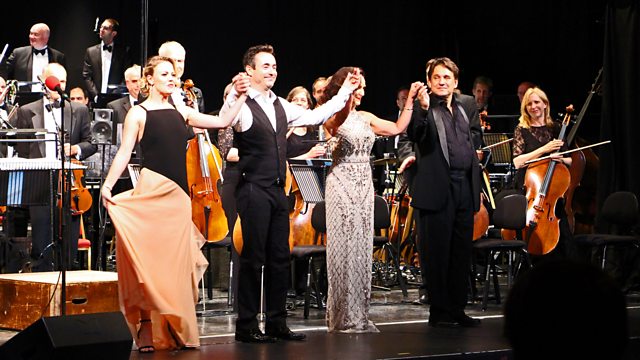 Join the Queen of Latin - Shirley Ballas - as she shimmies, shuffles, spins and chasses us through a selection of her favourite music with Joe McFadden and Joanne Clifton.

All this week The BBC has been celebrating the UK's thriving dance scene as part of Dance Passion. As well as special performances on television and features across radio, dance companies big and small have been live streaming rehearsals and behind the scenes insights from Birmingham to Leeds, Belfast to Glasgow, Swansea to London. You can see what's been happening by going online at bbc.co.uk/dance

To tie in with Dance Passion - another chance to hear Strictly’s Shirley Ballas as she shimmies, shuffles, spins and chasses us through a selection of her favourite music.

Joseph McFadden, though best known for his tv roles in Cranford, Heartbeat and Holby City, is no stranger to musical theatre . He has appeared in Chitty Chitty Bang Bang, Rent, She Loves Me and How to Succeed in Business Without Really Trying. In this special show he sings songs from the musicals and the great American songbook.

Joanne Clifton comes from a dancing family. She was taught dancing by her parents, former World Champions Keith and Judy Clifton, competing in her first competition at the age of just 3 years old, with brother, and fellow Strictly professional dancers, Kevin Clifton. She has many titles to her name including five times British Champion, three times Italian Champion, Professional Ballroom European Champion in 2012 and the Professional World Dancesport Champion in 2013.

She left Strictly to persue a career in musical theatre and has since appeared in Thoroughly Modern Millie; Flashdance the Musical and Tophat.

With Shirley at the helm much of tonight’s music has a latin feel and the BBC Concert Orchestra conducted by Keith Lockhart perform Mambo Jambo; El Cumbanchero; Soul Bossa Nova and Brazil.

During the interval another Strictly Star finds himself with time on his hands - Anton du Beke who with partner Susannah Constantine was voted off in the first week of the series reflects on his dancing years and recalls his remarkable leading ladies – including – Katie Derham, Nancy Dell’Olio and Ann Widdecombe.