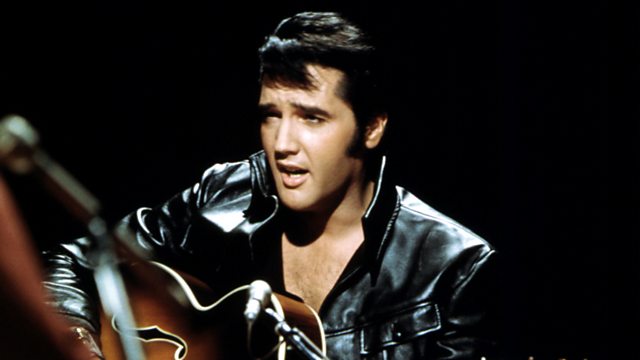 4 Extra Debut. Paul Morley tells a parallel story of Elvis and America, from the vantage point of the King's finest hour in 1968. From 2018.

Paul Morley tells a parallel story of Elvis and America, from the vantage point of the King's finest hour in 1968.

"I've got to do this sooner or later," Elvis says sheepishly, "so I may as well do it now."

And so the 1968 Comeback Special begins: his quiff defying gravity and his leather jumpsuit chafing, as he bursts into an elemental rendition of Heartbreak Hotel. It had been one of his first singles thirteen years before, initially recorded when he was still a teenager living in the Jim Crow South at the beginning of rock and roll.

Much had happened in the meantime: JFK, the Beatles, the hippies and Detroit soul. And Elvis had become a different person, depressed, addicted and increasingly irrelevant.

So by 1968, after his stint in the army, the uninspired films and the years of absence from the stage, the Comeback Special was an opportunity to resuscitate Elvis's career, to claw back his status as a powerful, credible force.

And it did, fleetingly. He was fabulous, and his discography is never better showcased than on that day.

But it also marked the point at which it became clear that the King was fragile.

He was 33, a new father, and he would never be this good again.

Paul Morley believes the 1968 Comeback Special shows us Elvis at his best. But also that it offers a vantage point from which to look backwards, forwards and outwards to a changing America - remembering where the hillbilly kid had come from and poignantly aware of where he would end up.