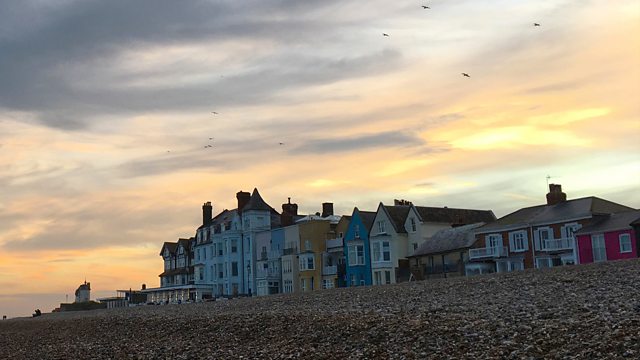 An exploration of how the sea and Suffolk coast inspired Benjamin Britten's music, and the story of the controversial Scallop on Aldeburgh beach dedicated to him

The composer Benjamin Britten is closely associated with the Suffolk coast at Aldeburgh where he lived and worked for most of his life. This episode of Open Country explores how this landscape and the sea inspired some of Britten's most famous work. Lucy Walker from the Britten-Pears Foundation describes how Britten became rooted in Suffolk and how important it was for him to write music specifically for the people and places in Aldeburgh. Two of Britten's well-known operas Billy Budd and Peter Grimes are about people who made their living from the sea - we hear from fishermen in Aldeburgh about how the industry has changed since Britten's day.

Britten often walked along Aldeburgh beach to think and compose in his head. An open stretch of this shingle ridge just north of the town is now home to the Scallop, Maggi Hambling's 15-foot stainless steel sculpture dedicated to Britten. Maggi tells the story of how Scallop was inspired by Britten and his achievements, and the row that erupted in the local community after it was installed.

Life on the canals at Foxton Locks