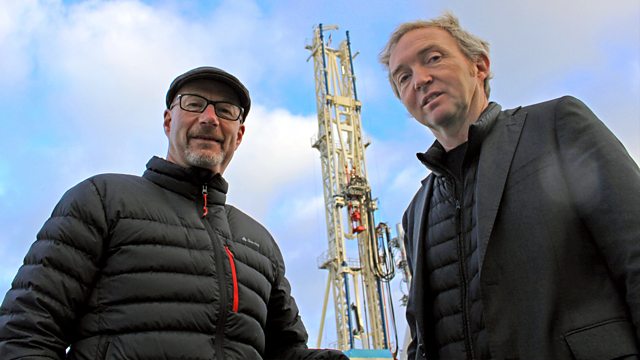 Heat from the Deep

Can we exploit the hot rock beneath the earth's crust for electricity? Peter Gibbs reports from Cornwall and Tuscany.

The heat contained in the top 3km of the Earth’s crust could power the planet thousands of times over. Despite that, less than 1% of the world’s electricity comes from geothermal energy. That may be about to change.

Near Redruth in Cornwall a 3 mile deep hole is being dug- it will be the deepest in the UK. Cold water will be pumped down to the 200 degrees hot rocks below, the hot water returning will drive turbines to provide electricity for thousands of homes. Nearby, the Eden Project and the seawater lido in Penzance are building their own geothermal plants.

But Cornwall is just the tip of the iceberg. Geothermal electricity was first produced in 1904 at Larderello in Tuscany. Today Enel Green Power supply a third of the region's electricity from natural steam and they have plans to get much bigger, exploiting an extraordinary bit of chemistry. When water goes above 374 degrees centigrade and 221 bars of pressure it becomes a supercritical fluid. This contains five times as much energy as 200 degree water, transfers energy twice as efficiently and has a lower viscosity. Overall, you can theoretically get ten times more energy than from a similar conventional borehole.

The new technology also promises more efficient geothermal energy in regions far away from geological hot spots like Iceland and Italy. The only fly in the ointment is that some techniques involve creating bigger fractures in the rocks. Experiments at Basel in Switzerland provoked an earthquake. So can the incredible potential of new-gen geothermal be exploited without provoking protests?

Art and the Environment

The Future of Our National Parks