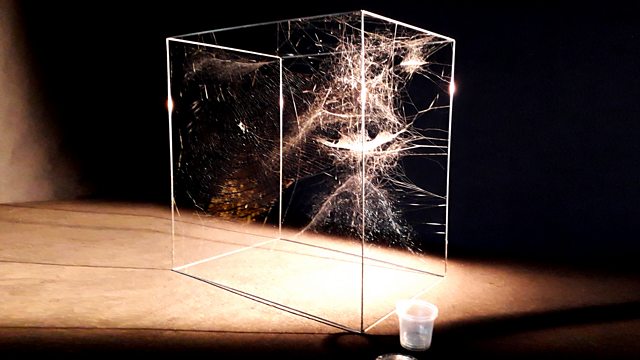 Struck by the beauty of spider webs, Tomas Saraceno made them into sculptures and discovered that when spiders move, the silken strands make tiny sounds, which he turns into music.

The Berlin-based Argentinian artist, Tomás Saraceno, trained as an architect. He was struck by the beauty of spider webs, their structural intricacy and began making them into sculptural works. Then he realised that every time a spider tugs a string as it spins a web, or moves along the silken strands, this causes vibrations. Using microphones and amplifiers it is possible to hear the tiny music they make. The different species create various sounds - bass, treble, percussion - and the result is an orchestra of arachnids.

On Air is Saraceno's latest and most ambitious exhibition. He has filled the Palais de Tokyo in Paris with extraordinary, beautifully lit spiders' webs, some connected to microphones so their occupant's movements echo round the gallery.

There is an African spider that spins large webs which lift in the wind and so they travel, gliding places new. This inspires Saraceno's lightweight sculptures that do the same, and an aeolian harp of spider silk, which sings in response to the turbulence caused by gallery visitors. In another piece, the amplified sound of a spider's movements cause dust motes in a beam of light to move, and these, too, produce sound. A whole room is strung with elaborate patterns of tensed ropes. Visitors move among them, plucking and stroking the strings which sound, the floor itself vibrating - the closest humans can get to the experience of a spider in its web.

Saraceno's work is a collaboration between artist, spiders and people, a kind of jam session. He also invites musicians to respond to them, to play along with spiders. The famous experimental composer Alvin Lucier does this in a concert, featured in this programme (and he bounces the sound of his heartbeat off the moon).

In the gallery in Paris, and his Berlin studio, Saraceno reveals his thinking and observations. The Spider Orchestra captures these, and all these sounds in a sonic web, and combines them. It, too, is a collaboration, between artist, spiders, people and producer - creating a compelling composition, for radio.