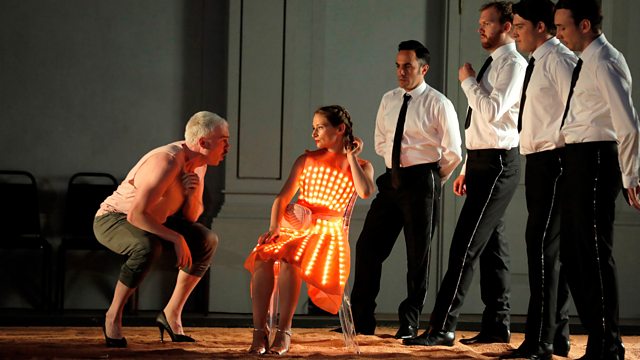 Lise Davidsen stars in one of Strauss’s most celebrated soprano roles as the mythological Greek heroine in this opera-within-an-opera. Eric Cutler is the Tenor, later Bacchus who leads the mournful Ariadne away to a new life and Sabine Devieilhe delivers the coloratura fireworks of Zerbinetta.

A collision of grand passion and comedy, the opera sets a libretto by Strauss’s long-term collaborator, the librettist, Hugo von Hofmannsthal. The opera began as part of an arrangement by Hofmannsthal of Molière’s Le Bourgeois Gentilhomme in 1912 but Strauss rewrote the work as we now know it for a 1916 premiere.
Presented by Kate Molleson with Sarah Lenton.

SYNOPSIS
The Prologue
At a sumptuous home, two theatre troupes are preparing for their performances: a commedia dell’arte group, led by the comedienne Zerbinetta, and an opera company presenting a serious opera, Ariadne auf Naxos. The Major-domo announces that, to save time, both entertainments must be performed simultaneously.

The idealistic young Composer is loath to permit any changes to his opera. But when his teacher, the Music Master, points out that his pay depends on accepting the situation, and when Zerbinetta turns her charms upon him, he complies. When he fully realises to what he has agreed, he storms out.

The Opera
Ariadne, who has been abandoned by Theseus, laments her lost love and yearns for death. Zerbinetta and her four companions from the commedia dell’arte troupe attempt to cheer Ariadne by singing and dancing, but without success. Zerbinetta insists that the best way to cure a broken heart is to find another love. Each of the four commedia men pursues Zerbinetta.

Naiad, Dryad and Echo announce the arrival of a stranger. Ariadne assumes it is the messenger of death, but in fact it is Bacchus, who falls instantly in love with Ariadne. As Ariadne and Bacchus celebrate their love, Zerbinetta claims that she was right all along.

Boito's Mefistofele from the Met