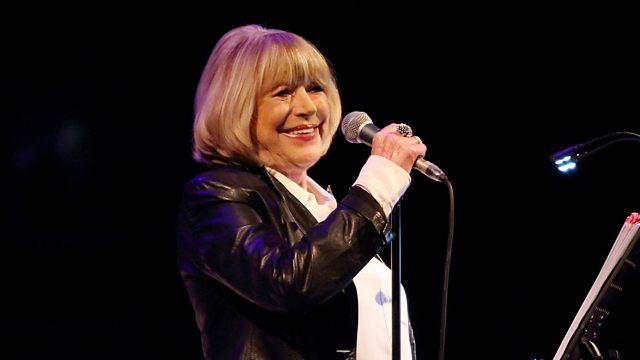 Marianne Faithfull on her new album, and how Holly Willoughby and Declan Donnelly fair sharing I'm a Celebrity presenting duties.

Marianne Faithfull released her first record in 1965 and now aged 71 she's releasing her 21st. Titled Negative Capability, the album is inspired by loss, ageing, and love. She discusses being misunderstood, her refusal to live in the past, and why this album is her most honest.

Last night Holly Willoughby made her I'm A Celebrity... Get Me Out of Here! presenting debut in what is the first series not to be hosted by both Ant and Dec since the show began in 2002. Convicted of drink-driving earlier this year, Ant stepped down from all presenting duties alongside his friend and long-time presenting partner Dec. TV writer Louis Wise reviews if Dec and Holly can re-capture that on screen magic.

As part of our art and mental health series we talk with digital artist Kirsty Latoya. Diagnosed with depression at the age of 13 she turned to drawing to help express her thoughts and feelings. With her first collection, Reflections of Me, she combines both her passions of art and poetry in the hope to help others also struggling with mental health issues.

A tweet from Broadhursts Books in Southport has gone viral since a children's book was sold on Saturday afternoon after sitting on the shelf for 27 years. Joanne Ball, who sold the book, talks about the reaction.

Negative Capacity by Marianne Faithfull is out now.

I'm a Celebrity without Ant

I'm a Celebrity Get Me Out of Here is on ITV at 9.00pm on weekdays and Sundays.

Kirsty Latoya's book Reflections of Me is available now.

Image: A detail from the cover of Kirsty Latoya's book, Reflections of Me.