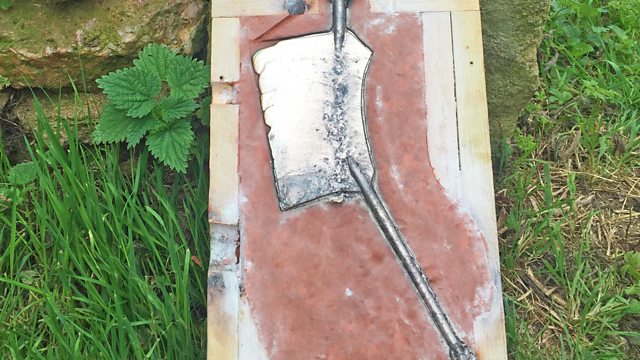 The sounds of casting, chiming, singing and clanging are fused together to make a magical sound track to the story of how meat cleavers have been used as musical instruments for over 300 years..

Growing up in Suffolk, Nathaniel Mann, heard stories passed down by his grandma about a tradition of the village Rough Band, made up of pots and pans, iron and metal implements, including meat cleavers - delivering a sort of sonic warning to anyone stepping out of line, committing adultery or behaving in way considered unacceptable.

As part of the Avant-Folk trio 'Dead Rat Orchestra', Mann, a singer and composer, has long been playing music with strange percussive instruments.
Coming across an old meat cleaver in his dad's garage he was inspired to make a set of cleavers to play music on - so turned to a bronze bladesmith to help turn meat cleavers into musical gold.

In a chance discovery, he discovered the idea wasn't new - and so he sought out Jeremy Barlow, author of “The Enraged Musician”, to find out the coded messages of Hogarth’s musical prints, including marrow bones and meat cleavers.

He also visits BathIRON 2018, as a new bandstand is being cast for the city of Bath, and gets the chance to conduct and sing with an orchestra of master smiths.

The freshly cast meat cleaver is finally used in one of the Nest Collective's Campfire Concerts, where the Dead Rat Orchestra join a trio of female folk musicians from Poland - Sutari - who have developed their own parallel world of Rough Music.

A joyful celebration, some nail biting forging, and some entrancing music. You've never heard cleavers like this before....