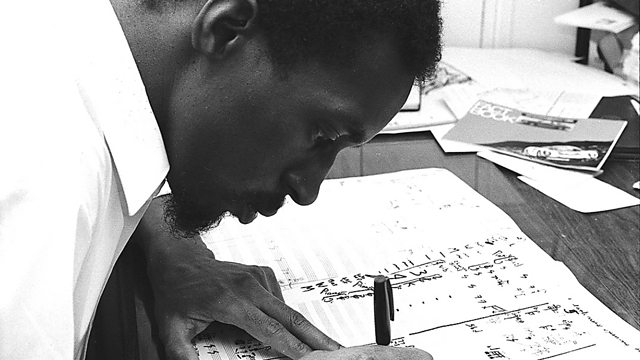 Experimental vocalist and movement artist Elaine Mitchener remembers the life and music of the brilliant New York composer-performer, Julius Eastman, whose work, she feels, has been wrongly overlooked.

Born in 1940, Eastman was black and gay when there were few like him in the world of classical music. He crossed between the worlds of minimalism, disco and contemporary new music and, for Elaine as a young British-Caribbean student of classical singing, was a much-needed hero.

Eastman studied composition at the Curtis Institute of Music in Philadelphia before joining the Centre for Creative and Performing Arts in Buffalo, NY - a hotbed for experimental musical outlaws. Alongside composing, he was a pianist, a dancer and a singer and was nominated for a Grammy for his compelling vocal performance of Peter Maxwell Davies' "8 Songs for a Mad King" in 1973.

In 1976, Eastman moved to New York City where he composed multi-piano works with controversial titles which put questions of racial and sexual identity on the table of contemporary new music. He moved between the uptown and downtown scenes, collaborating with the likes of Meredith Monk and Arthur Russell.

Despite his great talents, Eastman's life began to unravel in the mid-1980s and he died in 1990. American composer Mary Jane Leach has brought together Eastman's scores, securing his important legacy. Elaine is joined for a rehearsal of Eastman's work by cellist Anton Lukoszevieze and pianist Rolf Hind. They discuss the intricacies of Eastman's scores, his impact, and the experience of performing his work today.