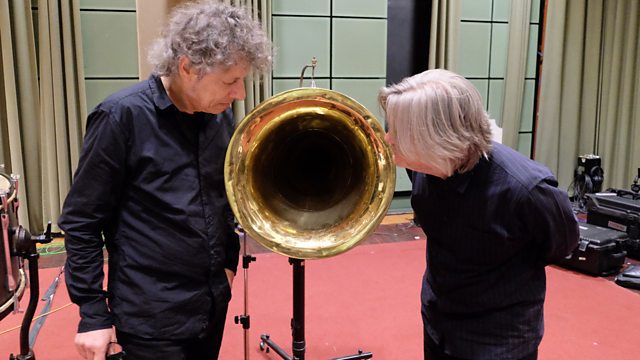 Invented mechanical instruments feature in this month’s session presented by Verity Sharp. Plus weird electronic pop, an accordion virtuoso and a mass for the dead.

In a world of glowing screens and impenetrable CPUs, Verity Sharp presents a collaboration session where you can hear its inner workings, featuring two artists from the world of mechanical music.

Pierre Bastien is a French composer and experimental musical instrument builder. For this session he assembled large meccano-style cogs to create rhythms, played prepared trumpet recorded onto a wax cylinder, used a fan and shredded paper for percussion and set up a circular system of flutes.

Aleks Kolkowski is a composer obsessed with sound recording and reproduction techniques of the turn of the century. To the session he brought a rare antique phonograph, musical saw, a stroh violin (mechanically amplified by a metal horn) and a 1920s mechanical zither.

Having never played together before the pair spent the day in BBC’s Maida Vale studios to create a sonically rich selection of new pieces exclusively for Late Junction. Also in the show: weird electronic pop music from Sone Institute, a mass for the dead recorded in 1930 and a track by the accordion virtuoso Mario Batkovic.