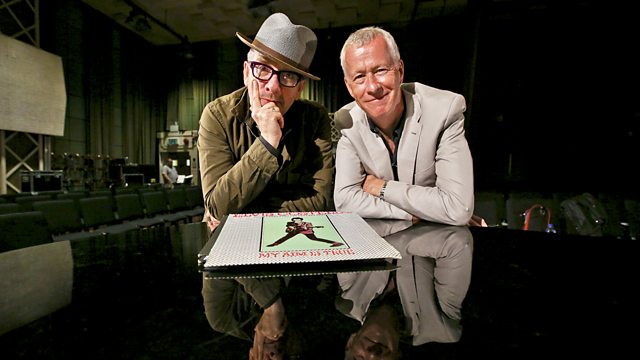 From his critically acclaimed debut album, My Aim Is True, released in 1977 to his about-to-be-released Look Now, his first new album in five years, Elvis Costello has been widely recognised as one of Britain’s best songwriters.

In a special edition of Mastertapes to celebrate National Album Day, the consummate album artists talks and plays his way back through a career that has spanned five decades.

From early classics like Watching The Detectives, Accidents Will Happen, and Almost Blue, all the way through to Jimmie Standing In The Rain, Unwanted Number and Under Lime his talent for wordplay has remained undimmed. He remains a composer who works across a range of styles, always mining a deep, rich seam of melodic and harmonic treasures - all of which is on display in this programme recorded in the iconic BBC studios at Maida Vale. Accompanying him is his career-long collaborator, pianist Steve Nieve.

This programme is part of BBC Music’s support for the first ever National Album Day, which takes place on Saturday 13th October with programming on Radio 1, 1Xtra, Radio 2, Radio 3, Radio 4, 5 Live, 6 Music, BBC One and BBC Four across the week or on the day itself.