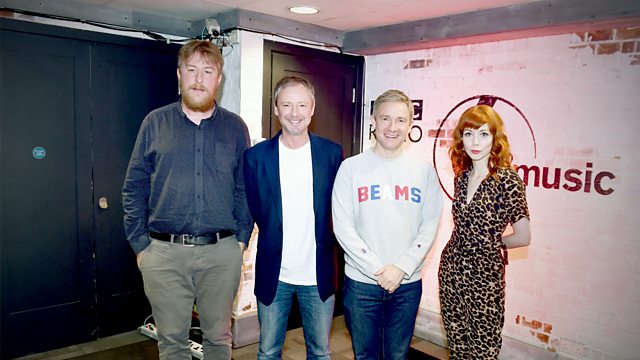 Martin is joined by John Harris, John Simm and The Anchoress, amongst others, to listen to this ground breaking double album with all the behind the scenes stories

How many albums with a plain cover would be immediately recognised across the planet with just the words “The White Album”? A nightmare for the marketing team, but as ever, the ideas and wishes of the Fab Four fifty years ago were way ahead of their time. Respected, award winning actor Martin Freeman is a huge fan of The Beatles 1968 revolutionary work (which John Lennon regarded as their song writing zenith) and will provide enlightening, entertaining and surprising insights into it.
This special celebration will include in depth appreciation by fans, experts and critics.
Martin Freeman and Giles Martin will introduce and explain a sample of never before heard material from the album’s original fabled Esher sessions at George Harrison’s house.
Most importantly it will be a Listening Party for a double album from one of the greatest and most innovative bands of the time – all the original album tracks played, enjoyed and discussed over an afternoon with the finest commentators and contributors.
Back In The USSR is perhaps the greatest album opener. While My Guitar Gently Weeps, Blackbird and Good Night undeniably some of the most beautiful songs written in the 1960s and 70s. Revolution 9 would be most people’s first experience of electronic avant-garde experimentation.
With his thirst for knowledge and previous presenting experience on 6 Music and Radio 2, Martin Freeman is keen to dig deep into key tracks and will also hear about the Abbey Road recordings and production sessions with those involved at the time and with the new 2018 mixes.
Martin will look at the turbulent times of 1968 with archive illustrations and look at the era, reflected on the album, when peace and love started to evolve into something different. It was the year of the Apollo 7 beaming back TV pictures from space, Led Zeppelin’s first live gig, The Kink’s Village Green Preservation Society, the new Trojan Record label and a kiss between Captain Kirk and Lieutenant Uhura breaking new ground.

See all episodes from 6 Music Celebrates The White Album

See all clips from With Martin Freeman (4)