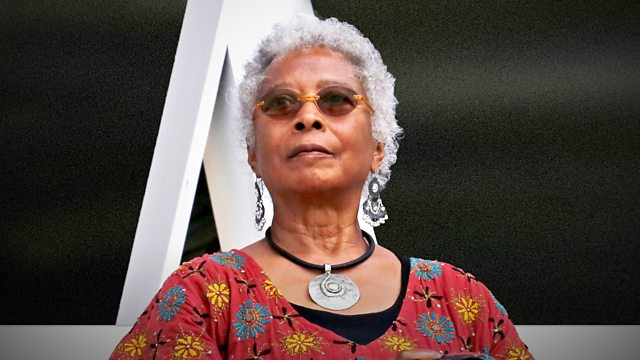 Alice Walker on her new book of poems, a documentary about and an exhibition by the renowned Japanese artist Yayoi Kusama and a new poem for National Poetry Day by Sean Street

Alice Walker is famous for prose books such as The Color Purple and In Search of Our Mothers' Gardens. But her first book was a collection of poems and she has published eight more. Alice talks about her latest, Taking the Arrow Out of the Heart, which ranges from poems of rage about injustice, poems of praise to great figures - BB King for instance - and celebration of the ordinary like making frittatas.

Japanese artist Yayoi Kusama is known for her pumpkin installations and her obsession with polka dots. A new documentary charts her career beginning in New York in the 1950s during the Pop Art movement, where she became well known for her provocative immersive exhibitions and performances. It covers her return to Japan in middle-age, checking herself into a psychiatric hospital and fading from public view, to her current status as the world’s bestselling living female artist. The film-maker Heather Lenz tells us about her documentary. Alongside the film, a new show of Yayoi Kusama’s recent work opens this week in London. Jacky Klein reviews.

Today is National Poetry Day. Twenty years ago, in its first contribution to National Poetry Day, Radio 4 commissioned Sean Street to write a sequence of poems based on the network's day. So, Thought for the Day was a poem, there was a poem about the pips - the Greenwich Time Signal - and another on the Shipping Forecast. These were dropped between programmes throughout the day. Twenty years later Front Row has commissioned a new poem from Sean Street on this year's theme of change. He reads it publicly for the first time.

The art of physical comedy, Damien Hirst, Andre Aciman, The impact of the arts on mental health

Alice Walkers's poetry collection, Taking the Arrow Out of the Heart is available now as a paperback and as an eBook.

The film KUSAMA-INFINITY is in selected UK cinemas and is available on demand from 05 October 2018, certificate 12A.

Image: A still from the film KUSAMA-INFINITY showing Yayoi Kusama at work

YAYOI KUSAMA: The Moment When I Went to the Universe is at the Victoria Miro Wharf Rd gallery, London until 21 December 2018.

Image: Yayoi Kusama :The Moment When I went to the Universe installation view

A poem for National Poetry Day from Sean Street

On the Air
Formby Beach

Migrant winds chorusing through the Marram Grass,
an aeolian harp rooted for airplay,
an air for setting the poem the wildfowl
make with their V, their chanting high above dunes
answering the change that adopts them across
the liminal from imagined curves of earth.

Their call emerges from the wash and hum of
transmissions between here and where gales strum on
other grasses. Coast is a border crossing.
The Marram duets, but it doesn’t translate
the delta flock’s shout, carving their arrival
in sky, tipped by a pivot of atmosphere,

here because of a trigger that fires in them
something that nothing else can of survival.
The dunes go on composing new harmonies
from winter with their rustling sand, reshaping
in counterpoint to the next incoming storm.
Marram Grass sings. Changing light chases the fade.