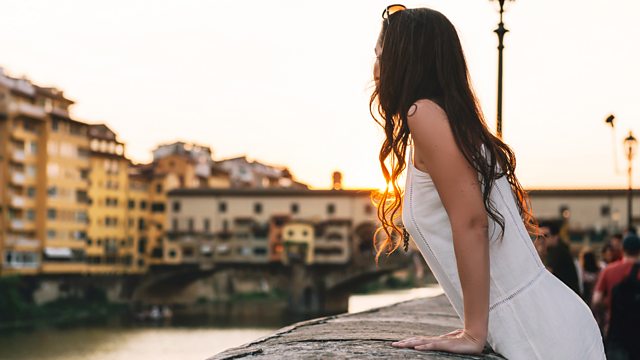 Two young women travel round Europe, when a painful past tests their friendship. An Imison Award winning two-hander by new writer Lulu Raczka.

Part of Radio 3’s showcase of new audio plays from the Edinburgh Festival Fringe 2018, recorded with an audience at the BBC’s pop-up drama studio at the Summerhall arts venue. Winner of the Imison Award, Best New Radio Script in 2019.

What makes a true friendship? What do women in their mid-20s really think about each other? In an era of increasing identity politics and the coming of age of the #MeToo generation, Lulu Raczka’s bold new drama is an exciting and insightful exploration of two young women’s bonds. Whilst on a trip across Europe, Kaela and Georgia look back at their younger selves and how their friendship has changed. Eventually, Georgia reveals an incident of sexual violence that at the time, Kaela was unable to fully understand. With hindsight, the two women are able to acknowledge the impact of the incident on them both and move forward. With moments of warmth, humour and honesty, Of a Lifetime offers a unique and touching portrait of a younger generation of women, and the strength they draw from female friendship.

Lulu Raczka is an award-winning young playwright and Company Director of Barrel Organ Theatre, with whom she worked on her first play ‘Nothing’. ‘Nothing’ was awarded The Sunday Times Playwriting Award as well as the National Student Drama Festival Award for Creative Risk. Lulu’s new play ‘A Girl in School Uniform (Walks into a Bar)’ was first produced West Yorkshire Playhouse in 2017 and has just been produced at the New Diorama Theatre. She is currently writing an episode of Frank Spotnitz’s new series ‘Medici: Masters of Florence’, starring Dustin Hoffman and Richard Madden, for Lux Vide and Netflix. Lyn Gardner has described Lulu as ‘A voice so distinctive and fully formed it's hard to believe she's so young’.

A Naked Production for BBC Radio 3.