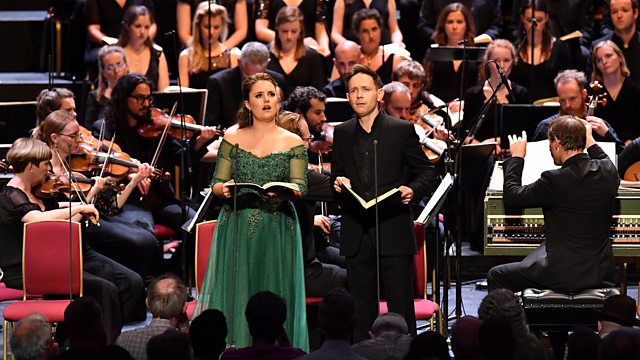 In a battle between love and faith, which will triumph? Following the success of last year’s Israel in Egypt, the Proms continues its journey through Handel’s oratorios with the composer’s own favourite and one of the most powerfully dramatic works he ever produced.

In  the  Temple  of  Venus  the  Romans  are  singing  the  praises of  Flora  and  Venus,  the  goddesses  of  love  and  beauty.  Valens commands  Septimius  to  go  to  Theodora  and  see  if  she  will submit,  before  continuing  with  his  careless  revelries.

Theodora  is  in  prison.  She  wrestles  with  thoughts  of  death  but rallies  when  she  envisions  the  joy  that  awaits  her  in  heaven.

Valens  questions  Didymus,  dismissing  his  explanations  and demanding  repentance  or  death.  Theodora  enters  and  offers herself  instead.  Theodora  and  Didymus  continue  to  argue about  who  should  die  for  the  other –  to  the  wonderment  of the  watching  Romans –  until  Valens  briskly  declares  that  both will  suffer.  Didymus  reassures  the  sorrowful  Septimius  that heaven  awaits  them,  before  joining  Theodora  in  death.  The  remaining  Christians  pray  that  their  faith  may  be  no  less  strong.