BBC One
The Real Marigold on Tour
Main content 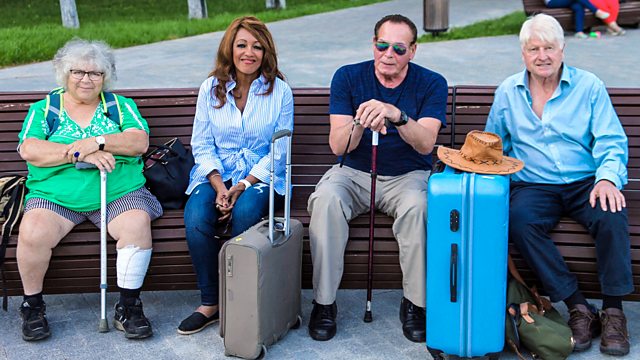 The Real Marigold on Tour Series 3
Episode 1 of 4

After experiencing what it is like to grow old in India, Marigold on Tour veterans Miriam Margolyes, Bobby George and Sheila Ferguson team up with new recruit Stanley Johnson. For their new adventure the group explore retirement in the largest country in the world, Russia. First stop on their journey is the cultural capital of St Petersburg, where Miriam and Sheila quickly find themselves at odds with Stanley's pro-Russian standpoint.

A military-themed fitness programme called Ready for Labour and Defence only serves to reinforce Miriam's wariness of Russia, while Stanley and Bobby form an unlikely friendship over some vodka. After visiting a lavish retirement home for retired actors, the group leave the comfortable surroundings of the city for a night in a Russian sanatorium. A legacy of the Soviet era, these rural retreats are intended to provide rest and recuperation through a strict regime of unexpected medical treatments. While Stanley enjoys a swim in a mineral-rich lake, Miriam is less pleased with the leech treatment she is prescribed, and Sheila fairs little better with a muscle massage via a high-powered hose.

Despite their unusual medical treatments, the sanatorium provides the group a chance to reflect on their inspiring and challenging insight into Russian retirement.

See all episodes from The Real Marigold on Tour

See all clips from Russia (2)