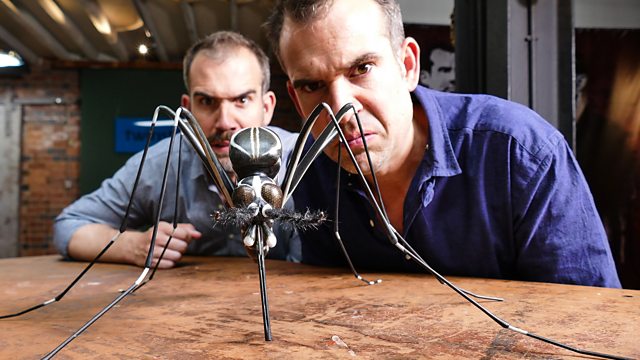 The Twinstitute Series 1
Episode 4 of 6

Identical twins put health theories to the test. Twins find out if its possible to get a better brain, repel mosquitoes and get fit just by watching TV!

First in this episode, three pairs of identical twins are putting their brains on the line. They find out if it is possible to improve your cognitive function by pitting two regimes with claims to do just that, head to head. It is creativity versus brain food. Geraldine, Zoe and Brian are 'Team Creative' and spending a month finding out if doing creative tasks can lower their 'brain-age'. Can an hour's worth of painting for a month really improve their cognitive abilities? It sounds far-fetched but as brain expert Dr Bradley Elliot explains, there is real science to this story. The theory is embarking on new creative tasks can cause actual physical changes to the brain allowing people to get better at recall and memory - their brain seemingly gets rewired as new neural pathways form. Meanwhile their identical siblings spend the month watching what they eat. Annemarie, Gay and Jeremy follow a 'brain-food diet' designed by nutritionist Priya Tew. As Chris explains, there is very strong evidence that what we eat does affect our brain function but drill into the science papers and it is hard to pin point specific foods and their effects.

Next Chris and Xand put their own bodies on the line to take on the dreaded mosquito! The number of British people travelling on long haul flights to hot countries has risen dramatically over the last decade, meaning more contact with these pesky insects. A survey by the London School of Tropical Hygiene and Medicine found that 60% of British tourists heading on holiday shun insect repellent. So what else can you do to avoid getting bitten? Chris and Xand try out two alternative methods to find the most convenient solution.

Finally we test a new theory that sounds too good to be true - apparently it is possible to lose weight while watching TV by tuning in to either comedy or horror! The theory is that both genres increase your resting metabolic rate so much that your level of calorie consumption goes up. The comedy does this by giving your abs a work out, while the horror causes you to release adrenaline which ups your heart rate. To put this to the test, five pairs of identical twins hit The Twinstitute cinema where one half watches comedy before their identical siblings watch horror. Will either technique be the ultimate couch-potato work out?

See all episodes from The Twinstitute