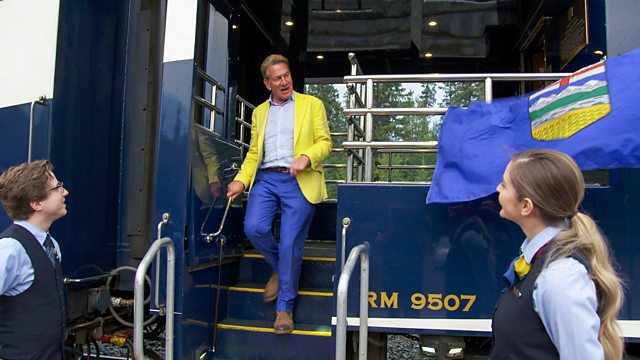 Armed with his 1899 Appleton's Guide to Canada, Michael Portillo learns how to head off a charging bear in the wilderness of British Columbia.

Armed with his 1899 Appleton's Guide to Canada, Michael Portillo learns how to head off a charging bear in the wilderness of British Columbia and holds on tight in a sidewinder while Canadian lumberjacks nudge tons of logs along the water to a sawmill. Striking east on the transcontinental railway, Michael stops first in Mission City, gold rush country in the 19th century but also a centre for the conversion by Catholic missionaries of the local indigenous population. Michael hears the tragic stories of First Nations children forcibly separated from their families as part of an official policy of assimilation and learns how Canada is facing up to the past.

His next stop is Kamloops, home to First Nations people for 10,000 years before the arrival of European settlers in the early 19th century. Michael follows his Appleton's to the wild wooded hills above the city, where his guidebook tells him he may find grizzly, black and brown bears, panthers, caribou and deer. British Columbia is home to around 150,000 black bears, one of the highest populations in the world. Michael learns what bears like to eat and is thrilled to see how they live in the wild. At the BC Wildlife Park Michael helps to feed two captive orphaned grizzlies.