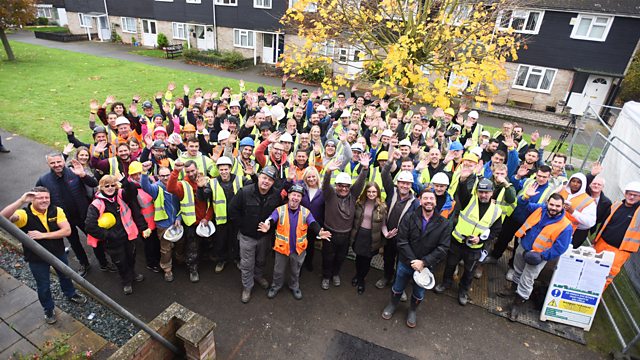 Nick Knowles and the team help Simon Dobbin in Mildenhall, Suffolk - a loving father, husband and football fan whose life was changed when he was attacked in March 2015.

Nick Knowles and the DIY SOS volunteers help Simon Dobbin in Mildenhall, Suffolk - a loving father, husband and football fan whose life suddenly changed forever in March 2015. After supporting his football team at an away game, he was set upon by a gang of men in a brutal and unprovoked attack. His wife Nicole rushed from her job as a senior care worker at a nursing home to find Simon fighting for his life in intensive care, after a massive stroke and bleed on the brain. Tragically, the vicious 90-second attack had left him permanently brain damaged, paralysed and unable to walk or talk, needing round-the-clock care. In July 2017, the 13 men were convicted for a 'ferocious attack'. Nine men were guilty of violent disorder, three of conspiracy to commit violent disorder and one of assisting an offender. After many months in hospital Simon is finally home, with Nicole as his full-time carer. He sleeps downstairs in a hospital bed in the living/dining room and is washed with a bowl of water as they can't access the upstairs bathroom. There is a make-shift curtain to separate the two spaces, but this doesn't stop the reality that he's lost his dignity, along with the life he once lived. Simon's current house is now unfit for purpose - it is inhibiting his rehabilitation and a massive strain on the family's life, and so that's where the DIY SOS volunteers step up and help this family in need. Interior designer Laurence Llewelyn-Bowen adds a truly unique and hilarious addition to the kitchen design, and the local RAF assist.

See all clips from The Big Build - Mildenhall (3)