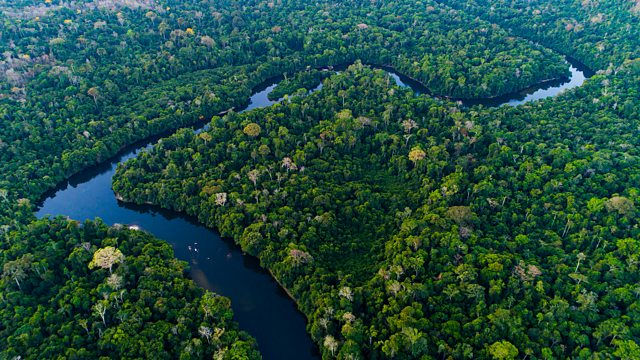 Documentary revealing the animals, landscapes and people of the greatest river on Earth. From transparent lagoons to pink dolphins, the Amazon hides spectacular secrets.

This episode is a pioneering exploration of the latest discoveries concerning the Amazon - by far the greatest river on Earth. It is the river of superlatives, flowing more than 4,000 miles from the Andes to the Atlantic. Its 1,100 tributaries drain the greatest river basin on the planet and along its incredible journey it collects and transports one-fifth of the world's fresh water. Its outflow into the Atlantic Ocean per second is greater than the next six rivers combined. It truly lives up to its mighty reputation.

Due to its enormous size, it still hides secrets - it truly is the mysterious river of myth and legend, and it really does have monsters living in it, like giant electric eels and botos - the world's largest species of river dolphin. For most of its length, it is impossible to see into its murky waters. However, there are a few secret springs, bubbling with water as clear as gin, providing an unparalleled window into the Amazon's rich and spectacular underwater world.

One exclusive location is the Blue Lagoon, home to an anxious young couple - a newly discovered species of cichlid. These fish take their babies out for a swim in this natural aquarium bounded by an ominous underwater curtain of dark river water. Camera traps reveal some of the infamous predators lurking within, like freshwater stingrays and Amazon barracuda. Prowling nearby are giant electric eels capable of generating more than 500 volts, who give the cameraman a run for his money.

The team scoured the entire river system for its most beautiful locations. The rocky terraces of the Cristalino River were the perfect setting to try out float cams which enabled the team to join a family of giant river otters on a fishing foray. In Peru, there is a newly mapped Amazon tributary which boils! Scientists believe it is the longest stretch of thermal river in the world, creating a snake of steam over the canopy at dawn. The show joins shaman Juan Flores as he prays to the water spirits and makes medicine from the river's sacred waters and medicinal plants he collects from the jungle nearby.

Every year the Amazon floods on an almost unbelievable scale. Stretches of the river can rise by ten metres and the weight of so much water temporarily sinks the earth's crust by three inches! GPS drone technology reveals this gigantic transformation as never before, transporting viewers through the many vistas and atmospheres of the great river, capturing swathes of rainforest steaming in the dawn, and revealing the incredible expanse of the immense river which, in some places, stretches far beyond the horizon. It creates the Amazon's legendary flooded forests, home to the hoatzin, or stinkbird, so named for its particular and pungent smell - they feed on a diet of leaves and are basically flying compost heaps.

On the shores of the river town of Alter do Chao are some of the most beautiful white sand beaches in Brazil. Known as the Caribbean of the Amazon, it hosts a dolphin-themed carnival complete with hundreds of sequined dancers, spectacular floats and colourful processions. When all this water finally reaches the sea, it creates the last and newest secret world of the giant river, the Amazon reef. Spectacular drone footage captures the spectacle of the Amazon's fresh water floating over the surface of the ocean as a vast green cloud (which can cover more than a million square kilometres).

High-tech submarines allow cameras to reveal the wonders of the Amazon algal reef, not just packed with technicolour fish but also home to 'gardens' of giant sponges, many a thousand years old and a metre across. The sponges feed on the nutrients that the Amazon has collected on it's incredible journey. No other river shapes the landscape, and even the ocean, in the way the Amazon can, and what is so fantastic is that it is still one of the few remaining healthy great rivers on Earth.

See all clips from Amazon (5)