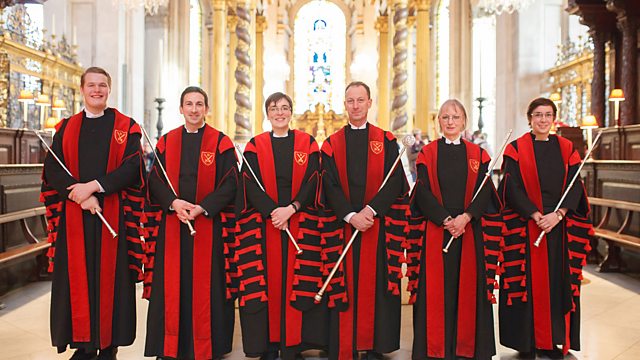 A behind-the-scenes look at St Paul's during their busiest time of year, revealing the secrets of Christmas at the cathedral.

This film goes behind the scenes at St Paul's Cathedral for their most magical time of year - Christmas. What is it like for the people who make the magic happen, and how do they cater for the 45,000 visitors that come through the cathedral's doors during the festive season?

Rebuilt by Sir Christopher Wren after the Great Fire of London destroyed its predecessor, St Paul's Cathedral is known as the nation's church and has become an iconic symbol of London - home to the royal wedding of Charles and Diana, Winston Churchill's funeral and the Queen's 90th birthday service. Every Christmas, the cathedral puts on a magnificent array of 17 special services and concerts, from the Advent Procession to carol concerts, Midnight Mass on Christmas Eve and Christmas Day itself. This programme watches as the spectacular events of the festive season unfold and goes behind the scenes as the Christmas trees are winched into place and the golden copes are repaired. From the clergy to the choirboys, the show discovers the gargantuan efforts that go into making Christmas happen at St Paul's and meet the dedicated people who turn these traditions into a reality.

The film introduces Canon Michael Hampel, a member of Chapter (the cathedral's governing body) and the man tasked with running Christmas at St Paul's. From the Advent Procession to the big service on Christmas Day, it is Canon Michael's responsibility to make sure every event in the St Paul's festive calendar is the best it can be. With a background in amateur dramatics, stage management comes naturally to Canon Michael. Central to the festivities are director of music Andrew Carwood and the 30 choristers that make up the cathedral's world-famous choir. The choristers board at the cathedral school, starting at seven years old and finishing around 13 when their voices start to change. They include 12-year-old Benjamin, who will be spending his last Christmas at St Paul's and hopes to sing the big Christmas solo.

Father James Milne was once a choirboy at Edinburgh Cathedral and is now a minor canon and the sacrist at St Paul's. His tasks this Christmas include finding the celebrities who will read at the Celebration of Christmas concert. Despite his busy schedule, he still finds time for his model train collection. Esther Anstice is one of the cathedral's virgers - the stage managers who make everything go smoothly behind the scenes. From counting wafers to hanging up vestments, distributing service papers to preparing candles, there is no task a virger won't do. Esther is also passionate about the history of St Paul's, revealing her personal collection of historic postcards of the building. Alongside the clergy, virgers and choristers, the show also meets other members of the cathedral's 150-strong staff who keep Christmas on the road, including the 'works' team, who haul three Christmas trees gifted by the Crown Estate into position and assemble the crib scene. In the bell tower are the Broderers, a team of volunteer seamstresses who repair the historic garments worn in services, and a team of flower arrangers put together the Advent wreath. The film also meets the refugees from the cathedral's affiliate charity, the Islington Centre for Refugees and Migrants, and Phyllis Bankale, one of the cathedral's longest-serving worshippers, who comes from Nigeria and has been visiting the cathedral since 1956.

The first big event in the St Paul's Christmas calendar is the Advent Procession, in which the congregation is plunged into darkness and a candlelit procession with 100 schoolchildren gradually brings light into the cathedral. It is a dramatic service - but it poses particular logistical challenges for the team organising it. The glitziest carol service at St Paul's is the Celebration of Christmas. With an orchestra, celebrity readers and over 2,000 guests, this is a major event for the team. There are celebrities to book, and just one chorister will be chosen to sing the prestigious Once in Royal David's City solo.

See all clips from Christmas at St Paul's (3)