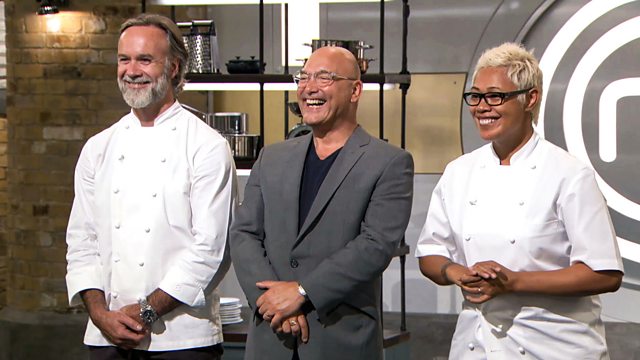 MasterChef: The Professionals Series 11
Episode 21 of 21

The search for the UK's 2018 culinary superstar continues. The final three chefs face one last challenge: to cook the best three courses of their lives for the MasterChef judges.

It's the final of MasterChef: The Professionals 2018. MasterChef presenter Gregg Wallace and two of Britain's leading chefs, Michelin-starred chef Marcus Wareing and Monica Galetti are within touching distance to finding the 2018 champion. Just one career defining cook off remains before one of the chefs takes the crown.

Over the last seven weeks, 48 of the most talented and tenacious chefs in the UK have battled each other for the coveted title. Now, just three chefs remain. This will be the last time they cook in the competition and the evening will end with one of them receiving the ultimate prize.

Tonight, the final three outstanding professionals, who have continued to stretch their abilities and surprise and dazzle the judges with incredible plates of food, face one last challenge: to cook the best three courses of their lives for the MasterChef judges. They return for the last time to the MasterChef kitchen and spend three hours creating a three-course menu of starter, main and dessert which showcases their exceptional culinary abilities. In this moment, everything is laid bare for the judges, as their plates will expose how far they have come and the magic of their unique cookery. They cannot falter, as they battle to display everything they have to offer - their talent for flavour and creativity, their ability to remain calm and controlled under immense pressure and to flawlessly deliver three plates of incredible food.

The reward is immeasurable as their career could change forever when one of them is crowned MasterChef: The Professionals Champion 2018.