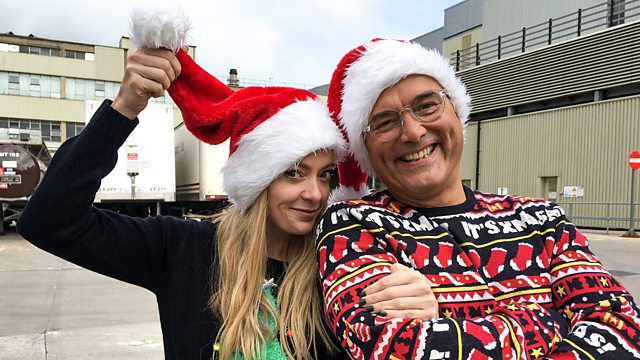 Documentary series. In this Christmas special, Gregg Wallace visits a factory which produces 2,000,000 tins of festive chocolate assortments a year.

Chocolates are an essential part of many people's festive celebrations. In this Christmas special, Gregg Wallace visits a factory which produces a staggering 2,000,000 tins of festive chocolate assortments a year. At materials intake, he receives 20 tonnes of liquid chocolate at 50 degrees Celsius. This is used in 10 of the 12 sweets in the tin. Everyone has their favourite - for Gregg it's the purple-wrapped caramel-coated hazelnut - and he follows the supersized batches of the toffee, orange and strawberry varieties on their journey from tanker to tin. In just one hour, 800 kilos of toffee are cut into precise 10mm x 55mm sticks before they disappear under a chocolate waterfall. Meanwhile, the orange centres make an epic 45-minute journey along 400 metres of conveyors, and 115,000 strawberry fondants head into wrapping, where 5,500 individual chocolates are packaged and dropped into tins every minute, ready to put colour into Christmas across the UK.

Cherry Healey is producing other festive treats. She travels to Germany - the home of so many of our Christmas traditions - where she joins a crew of 35 ornament decorators, applying glitter and paint to an army of glass Santas. In the UK, she goes behind the scenes at the Royal Mail as the Christmas stamps are printed. They'll grace the envelopes of around 1,000,000,000 cards this year. She also learns some tricks for perfecting gingerbread, but rather than a house, she produces a gingerbread factory complete with biscuit versions of her co-presenters. She's even got your Boxing Day leftovers sorted, bottling up 250 jars of spiced Christmas chutney.

Historian Ruth Goodman is on the trail of the Christmas turkey. It's a tradition that begins way back in the 16th century, when these birds were first introduced from Mexico. But at the equivalent of £450 per bird, only the richest could afford them. It wasn't until the 1950s that selective breeding made them truly affordable for the masses. And this year we'll tuck into 10,000,000 of them. She also comes face to face with the precursor to the pantomime dame - an 18th-century clown - and discovers that slapstick comedy is so called because of a stick that was slapped together to indicate that the funny bit was coming up.