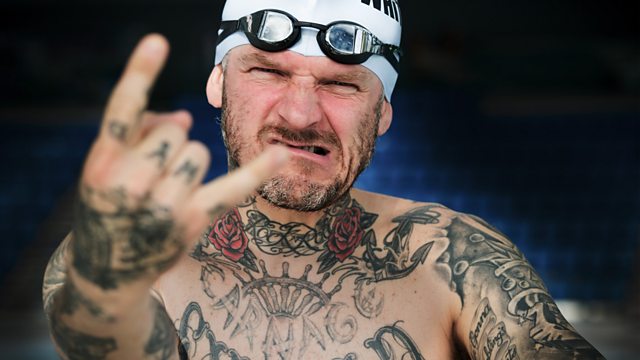 Nobody thought Mat Pritchard would survive into his 40s. Now, Wales’s favourite party boy and dare devil star of TV’s Dirty Sanchez has cleaned up his life and turned ultra-endurance athlete.

Nobody thought Mat Pritchard would survive into his 40s. Now, Wales’s favourite party boy and dare devil star of TV’s Dirty Sanchez has cleaned up his life and turned ultra-endurance athlete.

To prove it- to himself more than anyone else- he is about to take on his biggest endurance challenge yet. He’s turning the coastline, and the border of Wales into one enormous triathlon route in celebration of five years since the day he turned his life around. His aim is to be the first person to swim, cycle, and run around the beautiful country he calls home… and to do it in just 14 days. If he can stay on schedule, battling fatigue, the weather, and illness, he aims to finish this epic journey by running the Cardiff Half Marathon.

But for Matt, this is not just an endurance challenge, it is a journey of self-discovery. Wild Man to Ironman is Mat’s story, from rags, to riches, to ruin, and redemption.

From his humble beginnings on the streets of Cardiff, a shy, bullied, and academically overlooked Mat scraped together enough money to buy his first proper skateboard. Finding a unique talent for this ‘outsiders’ sport, coupled with his ability to withstand pain, Mat fell in love with skateboarding and no amount of failed tricks or broken bones would stop him from being the best.

His perseverance saw him become skateboarding legend, who, along with his close friends developed an reputation for not just skating, but playful antics and crazy dare-devil stunts. With good friend Lee Dainton they began filming their laddish lunacy and created Pritch v Dainton. Following a meeting with MTV bosses, who saw potential in their fresh TV style, they went on to find TV fame and fortune, hitting the headlines with Dirty Sanchez.
A film deal later Mat and Dainton, joined by Pancho and Joyce, were global celebrities and enjoyed the hedonistic trappings of a life akin to rock ‘n’ roll pinups, complete with hotel room trashing, fast cars and fast women. Mat, or Pritch as he had become known, loved it. His mantra became “sleep when you’re dead”.

But behind closed doors, Mat was struggling with his mental health. His alter ego Pritch was trapped in a dangerous and destructive whirlwind of partying, booze binges, and drug addiction. A love of living life to the extreme eventually lead him to a frenzy that nearly ended his career, and his life.

Something had to change. Looking at himself in the mirror, he saw a bloated, red-eyed, drunken mess of a man staring back at him. That triggered his quest for self redemption.

From wild man maverick to ultra-fit vegan ironman, Mathew Pritchard’s life story is as much of a roller-coaster of highs and lows as his mega triathlon challenge promises to be.
Told by Matt, and through the first-hand accounts of family and friends, we hear how he went from, nobody, to star, to train wreck, to inspirational record breaking athlete. In the process he saved his own life and became an inspiration for others to improve theirs.

See all clips from Wild Man to Ironman (2)