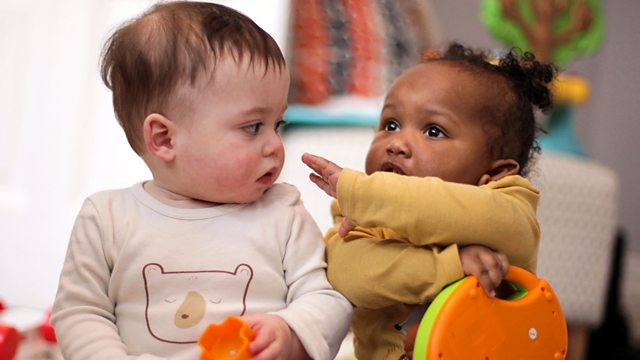 Documentary. Episode two looks at why we are born to respond to faces, what makes babies laugh and how we learn to empathise with others.

Three-part science series presented by paediatrician Dr Guddi Singh, bringing together over 200 babies and scientists from around the world to take part in one of the most ambitious scientific studies about babies ever attempted. With cutting-edge experiments we explore how the incredible changes that happen in the first two years of life make us who we are.

Episode two looks at the latest research into how we build social relationships. The team set up a series of experiments about how babies become social and learn to relate to the people around them. Starting with a fundamental question - how do we make our very earliest connections with others? Do we have to learn or are we programmed to bond from birth? To find out, the show heads out to the home of a newborn baby, just one week old.

Neuroscientist Dr Sarah Lloyd-Fox uses a cutting-edge portable brain scanner to analyse activity in Arthur's brain as he looks at images of toys and faces. She reveals that even at just one week old, Arthur's brain shows greater activity in response to a face than a toy in an area of the brain dealing with socialisation. Next in the baby lab, the team explores how important one-to-one attention is to babies by seeing what happens when it is withdrawn. Dr Emily Jones oversees as parents stop interacting with their babies and show a silent, still face for two minutes. The babies try various strategies to get their parent's attention back, showing that when the one-to-one bond is broken, babies work hard to try and reinstate it.

Presenter Dr Guddi Singh looks at a disturbing experiment form the 1950s which looked at the bonds between mother and child using baby monkeys as a parallel. Psychologist Harry Harlow thought that baby monkeys would be more interested in milk than cuddling a pretend fur 'mum'. But in fact the monkeys clung to the fur 'mum' showing just how important attachment is.

Early bonds are crucial for survival but what happens as our social world widens? Dr Nathalia Gjersoe sets up an experiment in the baby lab using good and bad puppets to find out when babies make decisions about who to trust. All the babies are under 12 months, so much younger than would be expected for them to be making these judgements. All of the babies chose the good puppet, even a baby who was just seven months old. Dr Gjersoe believes the babies' decisions are being driven by positive and negative emotions.

So far the programme has shown how babies' brain change dramatically as they develop socially. Next the team put adults to the test to see how they are affected by a baby's cry. They rig the home of one-month-old Noah with cameras and watch to see how his parents react to his cries. Although they sleep through dogs barking and traffic noise, Noah's cry has them springing out of bed. In the baby lab, Dr Christine Parsons runs an experiment using the fairground game whack-a-mole, to show how a baby's cry increases our reaction times, making us more efficient parents. It is because a baby's cry is like a biological alarm that taps straight into the amygdala in the brain - the fear response centre.

Next the episode looks at laughter. Laughter helps us bond with our babies, but it also decreases stress and boosts the immune system. So what's the best way to make our babies laugh? Psychologist Dr Caspar Addyman launches a nationwide study involving 300 parents to test what makes babies laugh. He discovers that the classic game peekaboo comes out on top.

There is one thing central to most of our relationships: talking. So how do babies learn to talk? Dr Michelle Peter thinks babies understand the rules of conversation before they actually use words. She sets up an experiment in the babylab with a chattering robot which shows that babies between the ages of 12 and 14 months can engage in conversational turns with the robot. Next the show asks when do babies develop a sense of self? In the babylab, psychologist Chiara Bulgarelli uses a mirror to test at what age babies start to recognise their own image. Somewhere between 19 and 24 months an amazing transformation takes place as babies begin to recognise themselves as individual people.

The emergence of self-awareness triggers another crucial advance in babies - the realisation that other people have thoughts and feelings different from their own. Professor Uta Frith sets up an experiments involving broccoli and crisps. Uta makes it clear that she loves broccoli over crisps. She asks the babies to give her a food to see if they can work out what she would like, rather than what they would like. For our final experiment we look at empathy. Gabrielle McHarg sets up a lifelike baby doll in the babylab and lets it 'cry' to see how the babies respond.