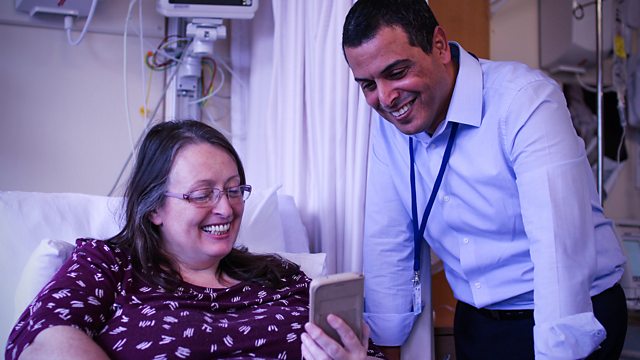 Observational documentary following the weight-loss journeys of four NHS patients being treated by one of the country's leading bariatric teams based at University Hospital Ayr.

There are 12 million obese people in the UK. This observational documentary follows the exceptionally moving weight-loss journeys of four NHS patients being treated by one of the country's leading bariatric teams based at University Hospital Ayr.

Alison weighs nearly 24 stone. She loves steak and salty microwave popcorn and is addicted to food. But while she doesn't like the way she looks, she doesn't see herself as fat. Her goal is to lose enough weight to gain the confidence to wear trousers for the first time since she was a child. Stephen weighs over 26 stone. Bariatric surgery will send his diabetes into remission, but he is struggling to give up all the sugary food and drink he enjoys. Stephanie weighs over 24 stone. She has been married to former soldier Stevie for almost 30 years. When he developed PTSD she became his carer. And when the pressure got too much, she sought comfort in food. Now Stevie is caring for her. But while she is determined to lose weight, she thinks Stevie isn't being fully supportive and wants to know why.

Teresa weighs over 25 stone. Four pregnancies and the breakdown of a troubled relationship all caused her weight to soar. And despite help from the NHS, for the past ten years she has failed to overcome her fraught relationship with food. She is now virtually housebound and fears she will never succeed. But all this could be about to change when a gastric balloon is inserted into her stomach.

As they prepare for operations that will not just improve but save their lives, these patients must first confront their problematic relationships with food and drink. Addiction, denial, obsession and even love must all be confronted if these obstacles to weight loss are to be overcome.

See all clips from Shedding the Fat (3)