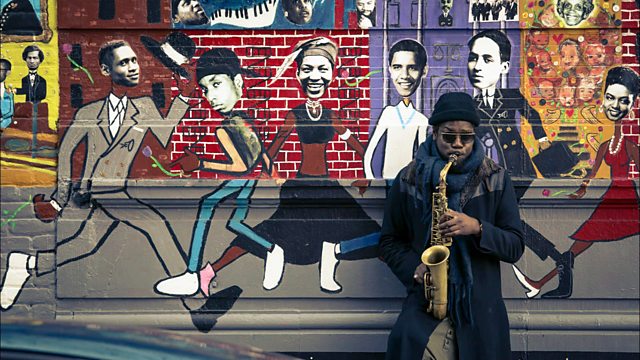 Saxophonist Soweto Kinch takes a personal journey into jazz through New Orleans, New York and London, where he meets and plays with fellow musicians.

Soweto argues that jazz is too often seen as a sterile museum piece, whereas in reality it's a powerful, political music which can only be understood through the history of racism and inequality from which it emerged.

In New Orleans he finds an older music rooted in the history of slavery. He meets saxophonist Donald Harrison Jr, who keeps alive the tradition of the Mardi Gras Indians, and joins Donald and his group the Congo Square Nation, who perform music influenced by African drumming and rhythms. Soweto meets musician and writer Nicholas Payton and trumpeter and composer Terence Blanchard. Both talk about how jazz emerged from the struggle of African Americans to form a new language in a country where racism and segregation gave them few outlets for self-expression. Jazz is rooted in the blues and throughout its history has straddled the secular and the spiritual. Soweto plays along with pianist Marcus Roberts, and meets singer Carmen Lundy.

Soweto then visits New York, which by the 1930s was firmly established as the centre of the jazz world. In Harlem, Soweto find traces of the city's jazz history but also discovers New York's contemporary scene. He meets singer and bassist Esperanza Spalding and saxophonist Donny McCaslin, who featured on David Bowie's album Blackstar. Michael Mwenso blends jazz, soul and swing and Soweto joins him for a live session.

In London Soweto meets Courtney Pine, who was part of a movement of black British jazz musicians in the 1980s who revived the art form and inspired successive generations. Lastly, Soweto meets the latest wave of British jazz musicians including Shabaka Hutchings from Sons of Kemet, Cassie Kinoshi of Nerija and Giacomo Smith of Kansas Smitty's House Band. All are rooted in jazz traditions but also draw upon contemporary influences such as grime and dubstep.