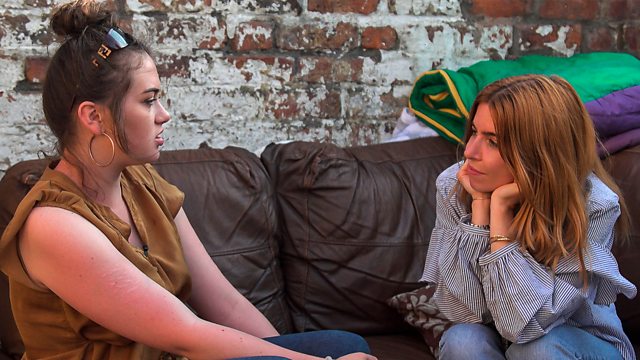 The Young and Homeless

Stacey Dooley hears from young homeless people, giving them a chance to share their thoughts and concerns and shining a light on their struggle.

Last year in the UK 103,000 young people presented themselves as homeless, but the real number is much higher as thousands of teenagers go under the radar by sofa surfing or staying with friends.

Filmed over nine months, this film gives a voice to some of society's most vulnerable young people, sensitively sharing their thoughts and concerns and shining a light on their struggle to find a safe place to sleep and their journey in securing a stable and permanent home.

We follow Josh, 18, in Blackpool as he tries to hold down a job while bouncing between night shelters, sofa surfing and sleeping rough. As he's 18 and is deemed as having no local connection, his only option is to save enough money and find a place in private rented accommodation.

Care leaver Shelby, 18, slipped through the net when she turned 18 and ended up on the streets. She has her heart set on finding her own flat as she wants to avoid the hostel circuit and getting in with the wrong crowd. She talks about the danger of being a girl on the streets and the importance of having friends to look out for you.

Shelby's friend Caitlin, 19, has spent the past year sofa surfing and staying in squats. In her lowest point she sleeps in a tent given by a charity with her boyfriend under some railway arches. We follow her journey as she realises being independent is not all it's cracked up to be and that she is craving help and stability. We see her move into an all-girls hostel and reflect on the past few months.

Shy Millie, 17, left her family home at 14. With ambitions to become a doctor Millie feels hostel life isn't for her, so with the support of Children in Need-funded project The Junction, Millie moves in with a local host family and finds the stability she needs to focus on getting to university.

Face to Face with Armageddon

Face To Face with the Bounty Hunters

See all episodes from Stacey Dooley