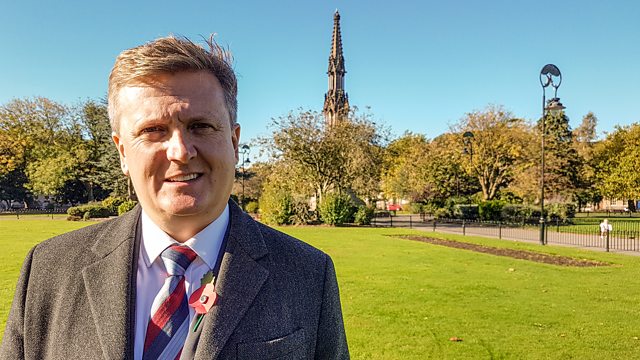 Songs of Praise remembers war poet Wilfred Owen, who was killed in action on 4 November 1918, during what became one of the very last battles of World War I.

Songs of Praise remembers Wilfred Owen, one of the greatest war poets in the English language. He was killed in action a hundred years ago on 4 November 1918, during what became one of the very last battles of World War I. Aled Jones and Frank Field MP discuss how Wilfred Owen captured both the horrors and, as he saw it, the futility of war, outside the Birkenhead home where the poet lived from the age of four. Locally-born actress Dame Patricia Routledge reads her favourite Wilfred Owen poem and joins the congregation to sing hymns in his memory at Christ Church in Birkenhead, where the poet attended services as a boy. Wilfred Owen enthusiast Martin Impey reveals his latest illustrations depicting the tragedy of war, and we meet the winner of Prince William's national poetry competition for a new work inspired by the poets of the First World War. Also in the programme, Aled Jones and Russell Watson join forces for the very first time to sing a beautiful medley of Where Have All the Flowers Gone and Here's To the Heroes. Hymns include For the Healing of the Nations and Make Me a Channel of Your Peace.